When Narada was do arrogance of being the greatest devotee in the world.

When Narada was do arrogance of being the greatest devotee in the world. 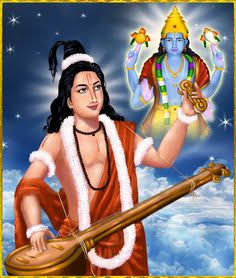 Once, there was a pride rises in Narada's mind that he is the biggest devotee of Lord Vishnu.  They started thinking, 'I sing Lord Vishnu's glory night and day.  Then who can be a bigger devotee than me in this world?  But I do not know whether Srihari also understands me like this or not? '

Considering this, Narada reached to Lord Vishnu at Kshirsagar and bowed to him.

"I know your mind, Narada.  Still want to hear from your mouth. "  Vishnu said.

O, God!  I have been praising you throughout my life, every moment, I only meditate you.  Tell me if you have any other devotee bigger than me in the world? "  Narada asked.

Vishnu had already understood that Narada has developed pride on his devotion, but hiding his mind, he said, "Narada!  For this question you will have to go with me to earth. "

"I'm ready, Lord."  Both started walking toward the earth.

Upon reaching the earth, both of them took the disguise of the farmer and walked towards a hut built on the side of a village.  Vishnu said, "Narada!  A great devotee of mine lives here in this hut. "

"Wonder, can anyone have more devotion than me."  Narada exclaimed, "Does he, like me, ? Does he keep your's form meditation in own mind anytime ?"

"Come, you will know yourself."  Vishnu said and headed towards that hut.

The farmer was tying his cow outside the hut at that time.  The voice of 'Hari, Hari Govind' was coming out of his mouth.  Farmer's form Vishnu went near him and said 'Narayan-Narayan', the farmer asked in a polite voice, "Where have you come from, Bhadra(Gentleman).  Please tell without hesitation if you have any service for me. "

"We are going to the city, but darkness has begun to come."  There is a fear of wild animals in the forest.  That's why we want an overnight shelter. "

"Welcome to my hut, Bhadra(Gentleman) and whatever some little amount of food, is present for you."  God has given me an opportunity to serve you people, it is a great blessing. "  The farmer said happily.

Putting the two out on a cot in the hallway, the farmer went inside and said to his wife, "Goddess!  Two guests have arrived. "

The farmer's wife was serving food to her children at that time.  Gently showing the pot of flour, she said, "There is no much flour in the house, and these children are asking for more food."

No problem.  We will provide the guests with a full meal. ”  The farmer said, " Today you make kanji drink for childrens ."

Narada and Narayana heard the whole conversation of the both of them, yet sat eat of food for test.  When the two were ate full of food, Narada thought, 'How can this simple householder be the biggest devotee of God?

On the other hand, Shrihari "'asked the farmer to fetch more food. He said," My stomach is not full yet. Will I get more food? "

The farmer went to the kitchen and asked the wife, "Is there any other food left?"

"Made kanji for children, that's all that's left."  Wife said.

Vishnu and Narada also drank that Kanji.  The farmer and his family had to sleep hungry.  Hungry children held the mother's hand and said, "Mother, I am not sleepy."  I am very hungry, why did the father also give kanji to those guests? "

In the hallway outside, both the guests were lying on separate beds.  Lord Vishnu said, "Narada You heard !  The farmer and his family did not get food, yet he is singing my glories. "

"This is nothing."  I have remembered you after being hungry for many days. "  Narada said.

They saw it the next morning.  The farmer was saying in front of the idol of Lord Vishnu, "Govind Hari-Hari.  You always stay in my heart, just, I don't want anything else. "  Then he said to both the guests, "Hari has a great grace.  He is the keeper of the world.  Is there any trouble at night due to the mercy of God?  Both of you stay here for as long as you want.  I'm going to the farm. "

"We will also go with you, if you do not mind."  Shri Hari said.

Narada and lord Vishnu went with farmer to his farm.  The farmer said, "This is my farm.  Now I will do my work… Govind Hari-Hari. ”

"You are a true man.  You are a great devotee of God, you keep taking his name every moment. "  Narada said.

"Oh no?"  Whenever I get a little time from work, then I remember his name. ”  The farmer said.

"When will you get time?"  Narada asked.

“I wake up in the morning.  I sleep at night then and during the day whenever I get time from work. "  The farmer told.

When both of them walked away from the farmer, Narada said in a sarcastic voice, " God you heard .  He remembers you two or four times a day in the morning while I always meditate on you.  Still you call him a great devotee. "

Srihari remained silent, but in his heart he said, 'You will know the reason too, Narada.'

Vishnu filled a vase filled with oil to Narada and said, "Narada!  Put it on your head and bring it to the front hill without putting your hand.  Remember, not a single drop of oil kept in this Kalash(vase) should fall on the ground. ”

"This task is not easy, however, if you are pleased, nothing is impossible."  Narada said and placed the urn on the head.

'Oops!  If a little attention is paid then the oil will spill out. ”Thinking Narada walked towards the hill, raising the urn on his head.

Narada went up to the hill and returned.  Vishnu said, "Narada has returned!  Okay, now tell me how many times have you remembered me in going so far and coming? "

"Think of yourself then."  Srihari said, “That farmer works hard all day.  Still, he remember me two or four times, and you could not remember me even once. "

Narada's knowledge eye opened.  Falling at Srihari's feet, he said, "O Lord!  Those who remember you even while living in the mess of the world are the biggest devotees. "