How Kansa was come to end.

How Kansa was come to end. 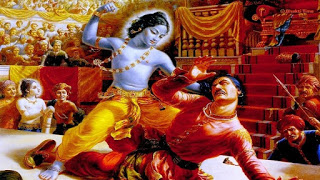 Everyone knows that Kansa was killed by Lord Krishna but very few people know how Kansa was born.  Once upon a time, Yaduvanshi King Ugrasen used to rule in Mathura city.  He was married to Padmavati, the daughter of King Satyaketu of Vidarbha. After marriage, Maharaj Ugrasen fell in love with his wife Padmavati so much that he does not like to eat without her.  Time passed that one day Maharaj Satyaketu started remembering his daughter.  He sent the messenger to bring her.  The messenger went and asked Maharaj Ugrasena for his condition and informed about the restlessness of Maharaj Satyaketu. The heart did not agree, but Ugrasen also thought that it has been long since Padmavati too remembers her father.  Now Padmavati goes to Vidarbha with the messenger.  What happens after going there is that one day while walking with her friends, she reached a mountain, there was a very beautiful forest at the foot of the mountain and an equally beautiful pond was built there. The name of that pond was Sarvatobhadra.  All the girls started bathing in the pond.  At the same time, a monster named Gobhil passed through the sky, and his eyes fell on Padmavati.  He was fascinated by that and after getting information about her, Gobhil took the form of Ugrasen and went to the mountain and started singing songs in a sweet voice from his illusion. Padmavati feel this sound like Ugrasena and ran towards the mountain.  Seeing Ugrasen there she was shocked and happy , she asked how did you come here, Goghil, who became Ugrasen, said that he could not feel happy without her, so he came.  The two began to lose in each other that sudden Padmavati had see on his body and saw a scar that was not on Ugrasena's body. Then Padmavati came to know the truth of Gobhil but by then it was too late.  The monster Gobhil told her that the whole world will tremble with the cruelty of the children born of our union.  Time passed and Padmavati came to Ugrasen, Ugrasen loved Padmavati equally after known all this.  After conceiving for ten years, Padmavati gave birth to a child.  Whose name was Kansa.

Kansa also had a sister, named Devaki Both siblings had a lot of love.  If Devaki used to scratch, Kansa used to suffer.  Devaki also got married with time.  Devaki's marriage with Maharaj Vasudev was completed happily, but when Devaki was being sent off, it was Akashvani for Kansa that the eighth child of Devaki would kill him.  Kansa was terrified at this and thought of killing the sister whom he loved so much.

Vasudev suggested to Kansa, who had made the idea of ​​killing Devaki, that he would hand over each of his children as soon as they were born, so therefore he should not kill Devaki.  Kansa found Vasudev's suggestion appropriate and Vasudev and Devaki were put in jail. Now after the birth of the child, he was handed over to Kansa and Kansa would kill him.  When the turn of the seventh child came, shortly before his birth, Lord Vishnu, with the help of Yogmaya, placed Devaki's womb in the womb of Vasudeva's first wife Rohini.  Balarama was the child born from Rohini's womb. Gradually, the time also came when Shri Krishna was born as the eighth child.  All the Kansa's soldiers went into deep sleep, Vasudev's fetters opened, the gates of the prisons opened automatically.  Like any way Vasudev managed to reach friend Nand baba house with Shreekrishna.

At the same time, Nandarai and Yashoda had a daughter, which Nandarai handed over to Vasudeva.  Vasudev came back to jail with that daughter.  As soon as Kansa got the news of Devaki's eighth child, he reached the jail and started demanding Devaki's eighth son.  Kansa did not take pity on hearing that the daughter is not the eighth son, and as soon as he went ahead to kill her, the girl went into the sky and told Kansa that his killer  had been born.

Now after the eighth child, Akashvani came again and Kansa came to know that the one who killed him has been born.  He ordered the killing of all newborns.  Many attempts were made to kill the child Krishna but did not succeed.  Krishna and Balarama grew older.

Krishna continued to show his leelas and the day also came when Kansa summoned his death by inviting Shri Krishna and Balarama to Mathura.  Kansa had woven a trap for Krishna and Balarama, but when is God trapped in someone's trap? When the mad elephant was left behind them, his trunk was cut and killed. After this, they were challenged for the battle of Malla(wrestling), one by one, all the nobles of Kansa went to death.  Now Shri Krishna said that Kamsa uncle the pot of your sin is over.  After this, Shri Krishna killed Kansa. In this way, by killing Kansa, Lord Shri Krishna liberated the people of the earth from an oppressor.  The day the world was freed from the terror of Kansa is considered to be the day of Ekadashi of Shukla Paksha of Kartik month.

The zodiac names  of Shri Krishna and Kamsa are also similar to those of Rama-Ravana. It signifies intense hostility or friendship. In both cases, a clear description of the victory of justice over injustice and fierce enmity.  At the same moral of story, both Rama and Krishna had to face terrible conspiracies of elusive demons before the final victory.