Our tradition is story-oriented.  Many stories for the same event will be found in the Puranas.  Then there is a difference in the stories in the north-south as well.  We north Indians do not know much about Lord Ayyappa of Sabarimala.  According to the legend Lord Ayyappa is believed to be son of father Lord Shiva and mother Lord Vishnu.

If we look at the mythology of Lord Shiva and Vishnu, both the gods created many leelas for human welfare.  Lord Vishnu, along with his twenty four avatars, has presented many example for the betterment of human beings.  Lord Shiva, with his meditation, anger and sacrifice, has given us a message to do Satkarma(good deeds) in every form.

But now let's consider who are the children of Shiva and Vishnu?  There are many avatars of Lord Vishnu and he was accompanied by many families and children.  Mahadev  is considered to be the only one family, in which he has two children as Ganesh and Karthikeya.  But this is not the whole truth.  There is also the third child of Shiva, it is worshiped as Lord Ayyappa.

The mystery lies in that Lord Vishnu gave birth to the third child of Shiva.

That is, the child of two men!

So let's know this secret related to the birth of Lord Ayyappa!

In Kalyug it is common for two men to have a relationship.  With the help of science, men have started giving birth to children, but in mythological history, it is surprising to have children of two male deities.  Before you reach a decision and make any unwanted perception, first understand this mystery!

If you have read or heard the mythology, then you will definitely remember about the Samudramanthana( sea churning) between the gods and the asuras.  In the Samudra Manthan, one name is mentioned repeatedly, which has been called Mohini.  In fact, when Amrit(necter) came out of the sea during the churning of the sea, a dispute arose between the gods and the demons about its sharing.

Then Lord Vishnu took the form of Mohini avatar and took the urn of nectar.

Mohini was so beautiful that the focus of the demons was more on the appearance of beauty of Mohini than a pot of nectar.  During this time, deceit happened and Mohini gave to the gods to drink nectar while the demons  getting only simple water.

But Mohini's character is not limited only to the story of Samudramanthan but there is another story ahead of it.

Actually, a demon named Mahishasura was inhabiting the earth.  Who had crossed all the limits of his ego and tyranny.  Troubled by the atrocities of Mahishasura, the gods prayed to Mother Durga for help.  After this, Goddess Durga killed Mahishasura.

But violence and arrogance did not end with Mahishasura.

Mahishasura's sister Mahishi was deeply saddened by her brother's death.  She was angry with the gods and that is why she started doing intense penance to make herself powerful.  She worshiped Lord Brahma.  Lord Brahma was pleased with this worship done continuously for many years.  Then Mahishi asked to a boon from Lord Brahma for herself immortality.

Lord Brahma said that it is against the laws of creation.  The one who is born is sure to die.  She can decide the condition of her death, but cannot postpone it.  Mahishi found the middle way.

She asked for a boon that I want my slaughter to be done by the son of Shiva and Vishnu.

Lord Brahma accepted her request and gave him a boon.  Mahishi felt that this is never possible.  Since the union of two gods and then children cannot be born.  Due to this arrogance, she created chaos from the earth to the heavens.  Once again, the gods were trap in trouble.

This time again all the gods reached the shelter of Lord Shiva.  They said that there is no solution in the boon that Lord Brahma has given to Mahishi.  The offspring cannot be born with the union of two men.  This is why none of us can kill him.  In a way, she has become immortal.

After this, the gods reached Lord Vishnu and requested him to solve this problem.  Although they were realizing that there could be no solution of this boon.

But something else was written in future.

Lord Vishnu sent his avatar Mohini to Kailash.  Lord Shiva recognized him after seeing Mohini.  Mohini proposed love to Shiva.  Since Shiva was a yogi and Kama lust never got involved in his weaknesses, he declined her offer to meet Mohini.  But Lord Shiva kept the honor of Mohini's love.

Shiva gave his semen to Mohini, which is called Parda(mercury).  Shiva and Mohini got together without making a relationship like this.  Since Mohini was an incarnation of Vishnu, it is also called the union of Shiva and Vishnu. Due the influence of Parda ,Mohini had pregnant and she gave birth to a son.

In the Puranas, this son was known as 'Harihar' or 'Manikanta'.  Lord Ayyappa, who is worshiped in South India,he is the 'Harihar'.  Ayyappa is the child of Shiva and Vishnu, so he possessed the powers of both the gods.  Later, he killed Mahishi and freed the gods from her atrocities.

Lord Ayyappa is also known by the name 'Hariharan'. Hari means Lord Vishnu and Harn means Shiva. The sons of Hari and Harn i.e. Hariharan. They are also called Manikandan.  Here Mani(gem) means gold bell and Kandan means neck. That is, the God who holds the gem in the neck.  He is called by this name because his parents Shiva and Mohini tied a gold bell around his neck.

According to the mythology, after the birth of  Ayyappa, Lord Shiva and Lord Vishnu who became Mohini , they tied a golden necklace around his neck and placed him on the banks of the Pampa River.  Then Rajasekhara, the king of Pandalam, adopted Ayyappa and raised him like a son.  King Rajasekhar was childless.  Presently, Pandalam is a city in the state of Kerala.

Shortly after Ayyappa started living in the king's palace, the queen also gave birth to a son.  The queen's behavior changed for adopted son Ayyappa after having a son.  Raja Rajasekhar understood his queen's mistreatment against Ayyappa.  For this he apologized to Ayyappa.

When Ayyappa came out of the forest riding the tigress, all the people of the state were surprised to see him alive and riding the tigress.  All cheered Ayyappa.  Then the king understood that his son is not an ordinary man.  At this he apologizes to Ayyappa for the queen's bad behavior.  Seeing his father upset, Ayyappa decided to leave the kingdom and went to heaven, asking the father to build a temple in Sabari (hills).  His purpose behind building the temple was to leave own memories on earth at the father's request.

According to the wishes of the son, Raja Rajasekhar built the temple in Sabari.  After the construction of the temple, Lord Parashuram built the idol of Ayyappa and installed it in the temple on the holy festival of Makar Sankranti.  In this way the temple of Lord Ayyappa was built and since then this form of God is being worshiped and the temple is the center of the faith of the devotees. 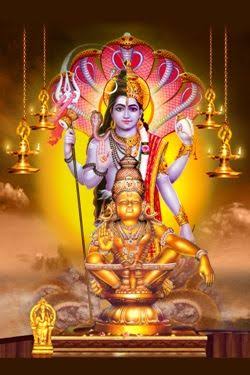 Near the temple, a flame appears in the dark night of Makar Sankranti.  Crores of devotees from all over the world come every year to see this flame.  It is said that whenever this flame is seen, noise is heard along with it.  Devotees believe that this is a divine flame and God ignite it himself.  It has been named Makar Jyoti.

Since the birth of Lord Ayyappa, it is clear that in Hindu mythology, the story of meeting of two gods is described.

So don't be surprised the next time you hear the name of Lord Ayyappa from the mouth of a South Indian!