In Indian mythological texts, Kubja is one such character whose interesting and surprising stories are found in relation to births.  In the eleventh chapter of Garga Samhita, there is a story of King Bahulashv. 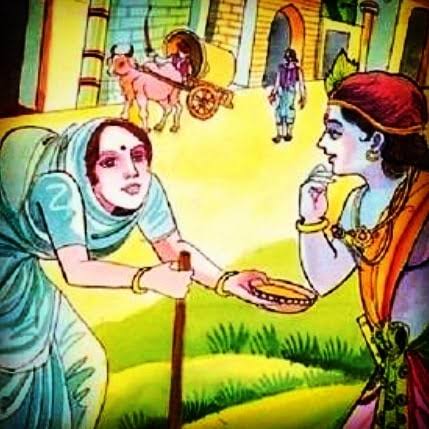 Once, while listening to the story from Narada Muni, Bahulashv asked him, “Muniver.  That Sairandhri Kubja had done which type of  hard penance in her former life, as a result of which the Supreme Lord Shri Krishna pleased upon her.
Because his less happiness is also rare for the gods?  On this, Devrishi Narada told him that it was a long time ago.  In the Treta Yuga, when Surpnakha saw Lord Rama in the Panchavati, seeing his attractive human form, she became enamored with facinated by her heart.
But she saw that Rama's affection is not going on her at all, while Suparnakha was wandering as a very lavanayamayi( beautiful) at that time.  She noted that Ram was extremely disgusted and no interest  upon seeing her and his only affection was towards Bhagwati Sita ji.
Due to seeing this scene , Surpnakha burning in this jealousy, rushed towards her to eat Sita ji, but Lakshman ji was alert.  He (Laxman ji) also immediately cut off his nose and ears.  Laxman ji wanted to kill her but Lord Rama forbade him to do so, he only asked Laxman ji to punish her and as a result Laxman ji cut off the nose and ears of that Surpnakha.
Disgusted by her insults, Surpnakha, burning in anger, came to her brother Ravana and prayed to Ravana to kidnap Sita.  When Ravana kidnapped Sita ji, she once again found Rama Lakshmana alone in the forest and came to pray (to Lord Rama) to marry her.
But even this time her wish was not fulfilled.  Now she was completely disappointed.  In the end, when Ravana was killed and also Rama without sita did not interested by her beauty, she was sadded and disappointed, she remained in the Pushkar region, meditating on the form of Lord Shiva and started penace.
In the end, when the Lord Mahadeva appeared and asked her to ask for boon, she wished Rama as her husband.  On this, Lord Shankar gave her the boon of getting him from Krishna form in the future i.e. Dwapara Yuga.  The same Suparnakha became Kubja in Dwapara.
She was born in Mathura as Kubja, a demon named Surpnakha, who had the ability to change the form according to her desire and she became beloved of Krishna only by the boon of Devadhidev Mahadev.

The story of Kubja is given in Sri Lomash Ramayana in another way.

According to that texts, at the time of Ramavatar, Kaikayi Maid Manthara was Krishna Priya Kubja in Dwapar yuga.  In a summary , the story goes like this: The people of Ayodhya came to know that instead of crowning their beloved Prince Rama, he was being sent for exile for fourteen years. And behind all this,  Kaikeyi's maid Manthara has the hand of this incident , so they all were enraged at the Manthara and those enraged Ayodhya's people asked Shri Lomash ji, “Lord! Why is this manthra opposed to Rama?  Whereas animals, birds, fools, schloar, trees etc. are  lovers of our Rama ”.

To this Lomash ji replied, “Manthara was the granddaughter of Prahlada and daughter of Virochan in the previous birth.  Even in that birth, its name was Manthara. When her younger brother Bali was in his mother's womb,  then the gods plan to cheated Virochan,  gods taking the form of a Brahmin and asked Virochan to donate his entire life to the Brahmins. So Dani(donor) Virochan gave up his body.  After which the demons became destitute.  They went to the shelter of Manthara.  Manthara assured them of defense.  Due to which the demons Shambar, Maya, Baan etc. came out for war, but they lost to the gods.
Then Manthara became fiercely angry at the gods and  in anger she tied all the gods through Nagpasha.  Narada Ji requested  to Lord Narayana for solution to this misfortune of gods  . Lord Vishnu gave immense power to Indra by which Indra not only cut the bond of Nagpasha but with the same power Indra defeated Manthara and made her unconscious.
Due to the influence of that divine power, Manthara's body became crippled, it became Kubja.  The demon women also ridiculed her from behind.  In the next birth after death, she was born in the same form in the Kashmir region and became the maid of Kaikayi to seek vengeance from Lord Vishnu, and she interrupted the establishment of Ram Rajya, due to which she was in infamy the whole world.
Due to her this infamy the lord saved her at the time of Krishnavatar.