Duryodhan's death was the cause of his mother Gandhari.

Duryodhan's death was the cause of his mother Gandhari. 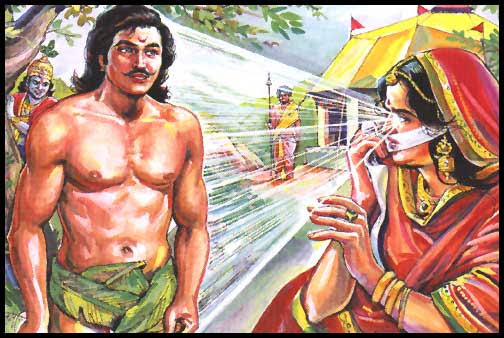 A woman was the cause of the destruction of the Kauravas.  We all know that the Kaurava dynasty ended due to  Draupadi's insult .  But are you aware of the fact that the cause of Duryodhana's death was not Draupadi but his mother Gandhari.
Let us know how Gandhari caused the death of her own son.

The era may have been there, but the mother and child's relationship has remained unbreakable.  A mother has always wanted that her child be away from every problem .  Direct evidence of this is found in the Mahabharata that took place in the Dwapara era.

Gandhari was a devoted woman.  It was her dedication to blind husband Dhritarashtra that she too blindfolded.  Its also tell that Gandhari was the unique devotee of Lord Bholenath.  It was her reverence and worship that Shivji gave  Gandhari to a wonderful boon.

According to the story, according to the boon given by Bholenath, if Gandhari would see anybody by removing the cloth on her eyes.  His body would become like Vraj.  This was the reason that she never removed the cloth on her eyes.
As such, Gandhari always kept cloth on her eyes .  But when the war of Mahabharata reached its final stage.  The great warriors of the Kauravas and 99 sons of Gandhari died, then Gandhari facinated by son's love and she was afraid of the death of her son Duryodhana.  In such a situation, Duryodhana was ordered to take a bath in the Ganges and come to naked.

As per the orders of his mother, Duryodhana went to bathe in the Ganges.  After bathing, when Duryodhana started going to appear in front of her in a naked state as his mother said.  At this time he met Shri Krishna on the way.  Shri Krishna knew the reason for Duryodhana to go to his mother in naked.

That is why he cleverly asked Duryodhana to take his trap of words that you do not feel ashamed, in such a situation how can you go towards the palace?  When you were a child, you could go in front of your mother in any form, but now you have grown up, it is unfair to go in front of mother Gandhari.

Duryodhana came to the words of Shri Krishna and covered the lower part of his waist with leaves and then appeared before Gandhari.  As soon as Duryodhana came, she opened her eyes , her eyes fell on Duryodhana's naked body, due to which his body became as hard as Vajra.  But the part on which Duryodhana tied the leaves.  Gandhari's vision could not fall on that part and the thighs part of the body could not become rigid.
Due to which this part of his body remained weak and he died as a result.  During the battle of Mahabharata, Duryodhana died only after  when Bhima attacked Duryodhana's thigh.