Why do Lakshmi and Ganesha worship together on the occasion of Diwali ??

Why do Lakshmi and Ganesha worship together on the occasion of Diwali ?? 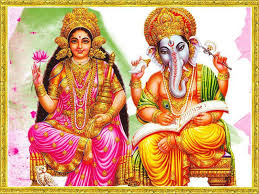 Diwali is celebrated as an auspicious occasion for Lord Rama to return to Ayodhya, although Goddess Lakshmi and Lord Ganesha are welcomed in every house on this auspicious day.  Worshiping the forms of Goddess Mahalakshmi is the most important part of Diwali. It is said that on the night of Diwali, Goddess Lakshmi goes to each house and blesses everyone with great wealth.  The festival of Diwali is mainly the festival of the goddess of wealth Lakshmi, and the worship of Lord Ganesha, a symbol of auspiciousness. It is well known that Goddess Lakshmi is the goddess of wealth, fortune, luxury and prosperity (both material and spiritual), while Lord Ganesha is known as the destroyer of obstacles, the protector of intelligence, art and science . We all have seen that it is always a tradition to worship Lord Ganesha with Lakshmi. Both are always worshiped simultaneously.  In such a situation, many people are eager to know why this is so?  What is the reason for worshiping Goddess Lakshmi and Lord Ganesha together?  Today we are making this revelation in this article.  Let's know why this happens-
Since no celebration is considered complete without invoking Lord Ganesha, it is no exception.  Ganesha is considered the deterrent of all obstacles.  Therefore, he is worshiped first to get rid of all the obstacles that hinder our development.  Along with this, the forms of Goddess Mahalakshmi are worshiped. It is said that on the night of Diwali, Goddess Lakshmi goes to each house and blesses everyone with wealth.  But the question is why Lakshmi and Ganesh are worshiped together.  There is an interesting story behind worshiping Lakshmi and Ganesh together on Diwali.
According to the religious scriptures, Goddess Lakshmi once fall in arrogance about her wealth and powers.  While in conversation with her husband, Lord Vishnu, she continued to praise herself, claiming that she is the only who one worthy of worship.  Because she bless all the worshipers with wealth and property. Thus on hearing non-stop self praise, Lord Vishnu decided to overcome her ego.  Very calmly, Lord Vishnu said that despite having all the qualities, a woman remains incomplete if she is not the mother of children.
Motherhood is the ultimate bliss a woman can experience and since Lakshmi ji did not have children, she cannot be considered complete.  Goddess Lakshmi was very disappointed to hear this . With a sadly heart, Goddess Lakshmi went to Goddess Parvati to ask for help. Since Parvati had two sons, she requested the goddess to allow her to adopt one of own sons to experience the joy of motherhood.  Parvati ji was not ready to give her son to Lakshmi . Although she was known that Lakshmi ji does not stay in one place for long time.  Therefore, she will not be able to take care of her son. But Lakshmi assures her that she will take care of her son in every possible way and that she will be blessed with all happiness.  Realizing Lakshmi's pain, Goddess Parvati let her adopt Ganesh as own son. Goddess Lakshmi became very happy and said that whoever worships Ganesha with me, I will give them all my siddhi and prosperity.  Therefore, since then those who worship Lakshmi for wealth should first worship Ganesh.  Those who worship Lakshmi without Ganesha do not receive the grace of Goddess in full, it is believed. Hence, Ganesha as well as Lakshmi are also worshiped on Diwali.  Also, it is also believed that getting wealth without intelligence will only lead to misuse of wealth.  Therefore, one must first acquire intelligence to spend money properly. In order to gain wisdom, Lord Ganesha is worshiped and prayed for good wisdom and after this, Shri Lakshmi ji should be worshiped in scriptural manner.

Another relevant question - why Lakshmi and Ganesh are worshiped, not Lord Rama?

Since time immemorial, Goddess Lakshmi and Lord Ganesha are worshiped on Diwali.  However, many devotees still have a relevant question in their mind and that is - why Lakshmi and Ganesh are worshiped on Diwali, not Lord Rama. This seems an obvious question as Diwali reminds Lord Rama returning to his kingdom Ayodhaya with mother Sita and brother Lakshmana  after own 14 year of exile.  During his exile, Lord Rama conquered the ten-headed demon Ravana. To explain this question, we have to refer to Hindu mythology.  According to popular belief, when Lord Rama returned to Ayodhya after his exile, he first worshiped Lord Ganesha and Goddess Lakshmi.  Since then the tradition of worshiping Lakshmi and Ganesh started on Diwali. It evolved into a "Diwali Puja" to worship Lakshmi and Ganesh on the night of Diwali. If you look closely, you too will appreciate the concept of Lakshmi and Ganesh worship on Diwali.  Lord Rama himself was an incarnation of Lord Vishnu - the protector of the universe. His worship Lakshmi and Ganesha remind us that we should always remember God first on this earth.  Being the king of Ayodhya, he worshiped Lakshmi and Ganesh to pray for the goodness, happiness and prosperity of the masses. He believed that due to their blessings there would be all-round happiness in his kingdom.  People will be healthy, intelligent and wealthy and will move on the path of truth and righteousness.  As Lord Rama represents "Ram Rajya", he gives the message to follow his ideals and follow his tradition.

That is why by worshiping Lord Ganesha and Goddess Lakshmi, we not only worship Lakshmi and Ganesh, but pay our true tribute to the King of Kings - Lord Rama.

By worshiping Lakshmi and Ganesha, we invoke wisdom, intelligence, health, wealth and prosperity in our lives.  Goddess Lakshmi is the goddess of all wealth and prosperity.  Whereas Lord Ganesha is considered as the god of learning, intelligence and success and prosperity. He remind us that money is useful and blessing is only when someone has the wisdom and knowledge to use it.  It also reminds us that wealth is only a means of acquiring material things in this world. Ultimately spiritual wealth is needed to attain eternal happiness.  So, we should worship Lakshmi and Ganesh religiously on the night of Diwali and welcome their blessings in our lives.  We sincerely hope that our explanation will clear any confusion in your mind as to Diwali Puja,  and why Lakshmi and Ganesh are worshiped on Diwali and not Lord Rama.

Additionally we have seen that Lakshmi, Saraswati and Ganesh are depicted together.  People are also eager to know about the relationship in them. 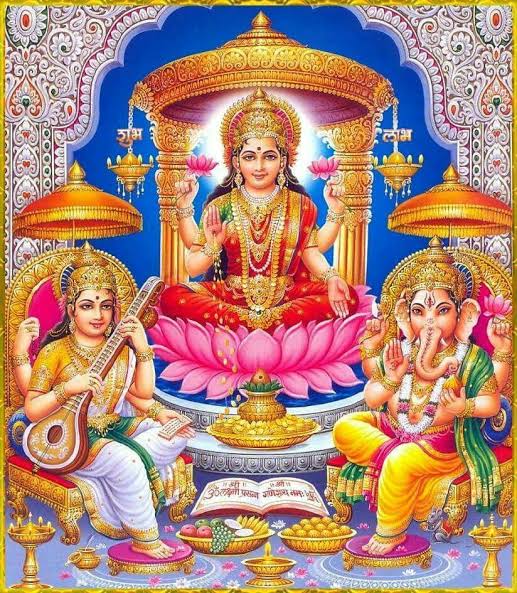