Why was Surpanakha and Shri Krishna married?

Why was Surpanakha and Shri Krishna married?

It is necessary to know about Surrapanakha before main story. 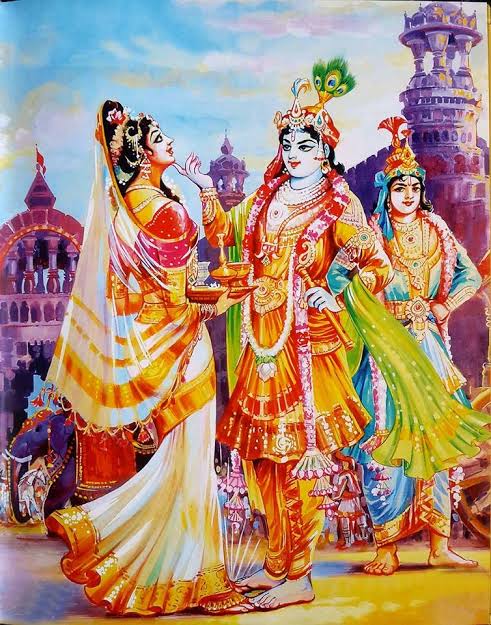 Shurpanakha, sister of Ravana and wife of Sri Krishna, yes this story is very interesting.  This story from Treta Yug to Dwapara Yuga is very interesting.  Know what Shurpanakha did, due to which she got the privilege of becoming the bride of God herself.
Hardly you know about Dandakaranya forests's ruler, Ravana's much-loved sister, Shurpanakha, that she had the privilege of being the wife of Sri Krishna.  The image of Shurpanakha in the common man is of a demon.  A woman who decided to take revenge on Sri Ram and Lakshman after being frustrated(that mean after cutting nose...after feeling insult) and inspired Ravana to fight. In the end it led to the destruction of its own dynasty.  But despite all this she became the wife of Shri Krishna, she was got salvation .  The great sages -saints is not able to achieve this happiness even after rigorous penance, but Shurpanakha got this blessing.

Hello friends, in this blog today we will talk about what was the name of Surpanakha or Surpnakha's husband, and the real name of Surpanakha!
Friends, Surpanakha was the sister of Ravana, her real name was Supnakha which means beautiful nails's woman.
Because Surpanakha was so beautiful that men were fascinated by seeing her nails, that's why her name was Supnakha.
What was the name of Surpanakha's husband: - Surpanakha's husband's name was Vidhutjivh, who was the commander of a king named Kalakeya. Once there was a war between Kalkeya and Ravana and where Kalakeya's army was headed by Vidutjivah, on the other side of Ravana.  Ravan himself was leading the army.
The situation was difficult in front of Vidhutjivah as it was his duty to protect his kingdom but if he did so, he had his own brother-in-law in front.
Surpanakha had explained to Ravana that do not invade the capital of Kalakeya, but Ravana was blinded by the longing for the expansion of his kingdom.
Vidhutjiv also decided to stand firm on his duty and stood in the battle in front of Ravana.
Ravana and Vidutjivah fought and Ravana killed Vidutjivah because Surpanakha was the wife of Vidutjiva so she was very sad and swore that one day she would destroy the entire family of Ravana.
Therefore, she went to Shri Rama and started harassing him because she had understood that only Rama can defeat Ravana, so she encouraged enmity.
And because of Surpanakha, there was war between Ram and Ravana.
And in the end, Shri Ram won.
Now let's move on to today's basic topic: -
Since birth, Shurpanakha's image has always been viewed with hatred due to the demonic kami and brutally massacred.  Even after doing penance for crores of births, even sages and saints are unable to see God.

Not only did Shurpanakha get the privilege of talking to Shri Ram, but Shri Ram also give her a oppertunity to talking Lakshmanji and also provide darshana of Bhaktiswaroopa Adhya Shakti Jagat Janani Jani Sita Mata.  Actually, the mystery of all this story is hidden in Shurpanakha's former birth.
There remains a curiosity as to what works Shurpanakha had done that resulted in her getting the privilege of meeting God. Humans and wise people always contemplate her, so let us know the story of Surpanakha's previous birth.
Surpanakha was Indra's nymph named Nayantara in a previous life.  It was counted among the prominent Apsaras like Urvashi Rambha Maneka etc.  Once the dance of Apsaras was going on in Indra's heaven, at that time Nayantara was also pointing with eyes while dancing. On seeing this, Indra was distracted and pleased over her.  Since then Nayantara became Indra's beloved.  At that time, a sage named Barja was doing penance on earth. Indra sent her to the earth to dissolve the austerity of the sage as he was pleased with Nayantara. But when the sage's penance was broken, he cursed her to be demonic.  On apologizing to the sage, the sage told her that you will have darshan of God in demonic form.  Then the same Apsara was born as Surpanakha after body sacrifice.
She had determined that, she would receive him when she saw God.  She went to Sri Rama Prabhu, making the same Nayantara form. But she is making a mistake that she has expressed her desire to get Lord Shri Ram as her husband. There is the process of attaining Parabrahma, only through devotion or vairagya (quietness ) can one achieve Parambrahma.  Surpanakha did not go to Bhakti Sita and Vairagi Lakshman, but she directly to Parambrahma and that was her biggest mistake. She wanted to separate Bhakti by becoming the wife of Shri Ram directly.  Apart from this, if she had taken shelter of vairagya, definetly  she had gained God. But not even taking renunciation, that is, not going to Laxman in the form of vairagya, and having come in ego and went directly to God, ego had come in her.  She says that there is no woman like me in the whole world, this means that there is no woman eligible in the world like me to be your wife.
It is not possible for the egoist to find God, yet he is sent to Laxman in the form of vairaga to get proper knowledge, so that she can know the correct process of meeting God.  Vairagya's form Lakshmana thought that the demon could not be to vairagi, so sent her back to the Lord, then the Lord said to her that I am in control of the devotee, then Surpanakha went to Sita Mata .
She thought that if the Lord is in control of this devotee, then I should eat this devotee. Therefore, Laxman ji got angry and cut his nose and dislocated the organ.
Then Surpanakha's Gyan Chakshu(Knowledge eye) opened up and became his assistant to carry out the work of the Lord.  After killing Ravana Kumbhakaran Meghnath etc. demon by the hand of God, She went to Pushkar to adopt the proper process of attainment of God and standing in the water started meditating on Lord Shiva.
10000 years later Lord Shiva appeared to Surpanakha and gave her a boon that in the Dwapara Yuga, Shri Rama would take the incarnation of Shri Krishna.  Then you will get Lord Shri Krishna in Kuvja form, then Shri Krishna will correct your hump and he will give you your beautiful Nayantara Apsara seductive form.  So friends, this was story according to which Lord Shri Krishna married Surpanakha.
Also read this article .....
Story Of Kubja's Previous Birth
By Shivgyaan at November 27, 2020