The Vrishabha Avatar of Lord Shiva was for the slaughter of Lord Vishnu's sons.


Who does not know the glory of Bholenath?  There is no limit of the glory of Mahadev, the God of Gods, Shiva killed his own demonic son in order to maintain peace.  Lord Vishnu, Mother Durga and Shiva are always ready to protect the universe. It is also mentioned in the religious texts that whenever the gods and humans called Shiva, he rushed to remove their troubles.  A story is also mentioned  in the Shiva Purana that in order to save the three worlds from the demons, he also killed the sons of Lord Vishnu.

The glory of Lord Bholenath is incomparable.  He is also the destroyer of the universe and he is also the protector.  When the world ends, it is done the by the hands of Shiva.  That is why he is also known as destroyers but this demolition also leads to new creation.  His name is also Shiva because whatever he does, he does for welfare. At different times, Shiva has taken 19 avatar forms for the welfare of the universe.  In which he killed the demons.  In one of his incarnations, he appeared to kill the son of Lord Shri Vishnu.

Now why did he has to do this?  Or how such sons were born to Lord Vishnu that Shiva himself had to take incarnation to kill them?  Let's know

According to the Puranas, gods and demons churned the ocean(Samudramanthan) to produce nectar.  After the churning of the ocean, a nectar urn was appeared .  Vishnu wanted to save it from the eyes of the demons. So he created many Apsaras(nymphs) with his illusion.  As soon as the demons saw the  Apsaras(nymphs), they were fascinated by them and took them with forcely to Patal Lok (Hades). After imprisoning the Apsaras in  Patal lok(Hades), the demons came back with the aim of getting the Amrit Kalash (nectar urn).  But coming back, they saw that already all the deities had consumed nectar. Seeing this, the demons became very angry and they attacked the gods.  But the god had become immortal by drinking nectar.  Hence the demons faced defeat.  They started running towards Patal lok (Hades) to secure themself.

With the intention of killing the demons, Shri Hari Vishnu went after them to Patal and destroyed all the demons there.
After the destruction of the demons, the  Apsaras(nymphs) were freed.
When they saw Vishnu ji, they were fascinated by him and they asked Lord Shiva a boon to Vishnu to become his lord(Husband). Shivji gave the desired blessing to those Apsaras and asked Vishnu to stay in the Patal( Hades) with the Apsaras.

Following the orders of Shiva, Vishnu started living in the Patal Lok with the Apsaras.  He received some sons from the Apsaras.  But all his sons were of the demon nature. On the strength of himself cruelty, these sons of Shri Hari Vishnu created a furore in the three worlds.  All the gods were troubled by their atrocities.  Therefore they went to Lord Shiva and prayed him to kill the sons of Vishnu.

Hearing the prayers of the deities, Lord Shiva took the form of a bull i.e. 'Vrishabh'.  After taking the form of Vrishabh, Shivji reached Patal Lok and there he killed all the sons of Vishnu. When Vishnu reached there, he was very angry to see his lineage destroyed and he attacked Vrishabha but all his blows were fruitless. 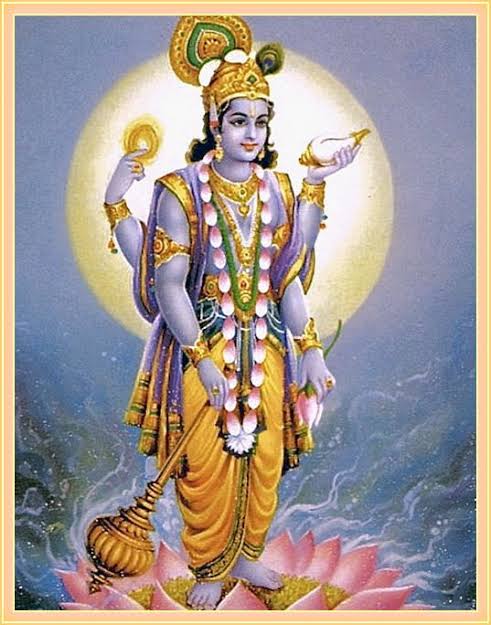 Neither of the two had any loss nor any gain even after a long war.  In the end, the Apsaras who tied Sri Hari Vishnu in their boon freed him.  After this incident, when Shri Hari Vishnu realized this incident, he praised Lord Shiva.  At the behest of Lord Shiva, Vishnu left the Patal(Hades) and returned to Vishnulok.
Image source....www.whoa.in