Lord Vishnu has taken a total of 24 avatars.  Varaha is the third incarnation after Matsya and Kashyapa.  Varaha means shukar(Boar).  Through this incarnation, the first step of the divine with the human body took place on earth. The face was Shukar(boar), but the body was human.  At that time, a monster named Hiranyaksha captured heaven by his power and took the whole earth under him.  Hiranyaksha means Hiranya means gold and Aksha means eyes.  One whose eyes are fixed on the other's wealth is Hiranyaksha. This verse of Srimad Bhagavad Gita means that I am born myself when dharma is in dangerous situation  and unrighteousness prevails.  The stories of Lord Vishnu's Dashavatar describe the significance of this verse told by Lord Krishna. The eighth avatar of Vishnu was Shri Krishna himself, his 9th avatar is considered Mahatma Buddha but there are differences on it.  The tenth incarnation is yet to be found, at the end of the Kali Yuga, there are stories of the incarnation of the tenth avatar Kalki.
But here we will talk about Varaha, the third incarnation of Lord Vishnu.  Actually, it is believed that Lord Vishnu incarnated as Varaha, his third incarnation on the third day of Shukla Paksha of Bhadrapad i.e.Bhadon month. Therefore, Shukla Tritiya of this month is also celebrated as Varaha Jayanti. Let us know what was the need for Lord Vishnu to come into Varaha form. Who was it that caused unrighteousness to spread everywhere?

According to the legend, Jai and Vijay, the gatekeepers of Baikuntha Lok, stopped 4 Rishikumaras at the gate while going to Baikuntha Lok, due to which they were cursed that both would have to live being demon on earth for three births. In the first birth, both were born as the sons of Kashyapa and Diti and were called Hiranyakashyap and Hiranyaksha.  Both started harassing the Earthy humans.  The tyranny of Hiranyakashyap and Hiranyaksha was increasing on the earth.  Hiranyaksha started torturing people on performing Yajna ,havana etc.

Two stories related to the story of Varaha Avatar are prevalent in the public mind, the first story is described in chapter 13 of the Bhagavata Purana.

According to the 1St story(Bhagavata Purana)

When the Parampita Brahma was creating the universe, he saw that the earth is submerged in unfathomable water and it is impossible to create the creation without the earth, Brahma ji kept thinking for a long time how to get the earth out of this bottomless water.  Brahma Ji was thinking in such a way that then a Varaha of equal size of thumb came out from his nose hole and stood up in the sky.
In view of Brahma ji, that small Varaha  became huge like an elephant in an instant, which Brahma started thinking that which divine creature has appeared here in this boar form, it came out of my nose but in a moment of the  become equal to the mountain.  This is definitely the leela of Lord Vishnu, Brahma ji was thinking that he started roaring loudly and entered the water very fast. When he was entering in the water, divine light was coming out of his eyes and due to taking the form of a boar, he began to search earth by sniffing .
After reaching the abyss, Varaha incarnation Lord Vishnu saw the earth, then holding the earth on his molar, brought it out of the water, but then mighty Hiranyaksha attacked him there. Due to which the Lord became angry like sharp edge the Chakra and he killed him with his leela like a lion kills an elephant. At that time the whole body of the Lord became red with blood as if he had come to hit a red mound of soil.  And took the earth out from water and set the earth on space.
Then all the Gods and Goddesses including Brahmaji praised and worshiped the Varaha Avatar!

According to the second story: -


There were two demons named Hiranyaksha and Hiranyakashipu who received a boon from Brahmadev that no one could defeat them in the war nor could anyone kill them. After getting boon, both of them started thinking of themselves as immortal. And  they began to understand himself as equivalent to lord Vishnu and in the desire of conquering the three worlds, they went towards Indraloka(Heaven) to do battle. When Indra came to know about this, he left Indraloka(Heaven) and ran away.
When both the demons could not find any in Indralok, Hiranyaksha reached Varun's capital Vibhavari city and said that Varun Dev  you had defeated the demons and performed the Rajsuya Yajna, now you have to defeat me in battle. Come and fight with me, Varun got very angry after hearing about the monster, but he knew the boon of Brahma ji, so  he said calmly that Hiranyaksha you are a great warrior . Therefore, there is no strength in any of the three worlds apart from Lord Vishnu that he can fight with you, so you go to him only, he can calm your longing for war.
After hearing Varuna, Hiranyaksha went to Devarshi Narada and asked where to find Narayana. Devarshi Narada also told Narayana's address and said that O demon king Narayan has taken the form of Varah at this time to remove the earth from the abyss.
Now knowing the address of Narayan, Hiranyaksha also reached the abyss, where he saw Varaha God carrying the earth on his molar. Then that ungodly monster said to Lord Varah, "Hey, wild foolish animal, where are you taking this earth, Brahma Ji has given this earth to us, you lowly animal, you cannot take the earth from here.  You are enemy of demons and monsters , so today you will not be survive  by my hands.
He sometimes called God shameless, sometimes a coward, sometimes cheater, but Lord Varaha smilingly took the earth out of the abyss and set it on top of the sea, while the demon Hiranyaksha was continue uttering abuses to Lord Varaha. Then God said that the  you foolish demon would only say that war would also happen. Hearing this, Hiranyaksha attacked on Lord Vishnu. A fierce war broke out between Lord Varaha and Hiranyaksha. The demon attacked the god with gada(mace )trident and all kinds of divine weapons, using his maya (illusion), sometimes he used to make bones rain, and sometimes the rain of blood , sometimes he would disappear and sometimes he would be appear .
But Lord Vishnu was not distracted, he had destroy all the maya(illusion) of that demon. When Lord Vishnu kept hoaxing that demon for a long time, he kicked one of the demon's face with a strong kick, which caused his eyes to come out and that he was become poweless and fall on Earth like a mountain .After that Lord Varah killed him. As soon as he conquered Hiranyaksha, Lord Varah made a loud roar that caused the three world to tremble.
Happy with the slaughter of Hiranyaksha, all the Gods and Goddesses started showering flowers on Lord Varaha. 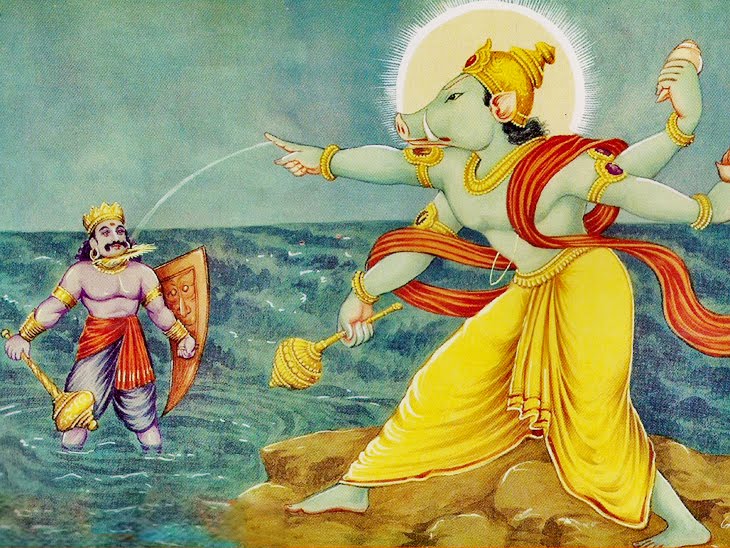 This was the story of Varaha Avatar.  There is a description somewhere that Hiranyaksha and Hiranyakashipu were powerful from birth itself.  Both did not do penance of Brahma ji, but after the slaughter of Hiranyaksha, Hiranyakashipu obtained a boon by doing penance of Brahma.  Somewhere there are also descriptions that Hiranyaksha himself hid the earth in the sea so that the creation work is obstructed.  Well, whatever the reason, whenever I will write the story of Varaha Avatar and Narasimha Avatar, I will try to clarify these points.