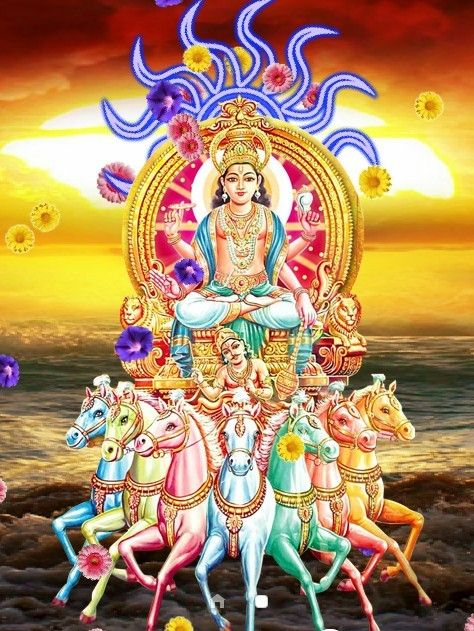 Suryadev is an important basis of creation.The body and mind are energized by assimilating the sun's rays.

There is diversity in Sanatan Hinduism, there are many deities here as well.  One of these deities is Surya Dev who is directly visiable and gives life to individuals, trees, plants and animals.  All life is incomplete without the suryadev who removes darkness and gives light.  The glory of the suryadev is described in detail in the Vedas and Puranas.
Just as water, air and earth are needed for life, in the same way, the energy of the sun is also very important for the organism to be confirmed and thrive.  According to science, the Sun has been considered as a source of energy in the earth.  If the scriptures are believed, then the Sun is considered to be the god of creation.  It is believed that by pleasing the sun, any person can make his life happy with wealth and can get the desired boon.

Surya is the only deity who does not need any offerings or big rituals to please him.  He can be pleased only by saluting them or by offering water.  Sun is also considered to be the God who provides energy to the whole world.

Suryadev is a boon for the Earth, the world get light by the Suryadev, but in Hinduism, Suryadev is the main deity of the dharma.  Suryadev is also described in the Vedas and Puranas.

Birth story of Suryadev: - In mythological context, many references to the origin of Suryadev are received.  Although there is a difference in the events described in them,but many of the themes are similar.  According to the most popular belief, Lord Surya is the son of Maharishi Kashyapa.  He was born from the womb of Aditi, wife of Maharishi Kashyapa.  Due to Aditi's son, he got a name Aditya.  On the basis of ancestral name, he became famous as Kaashyap.
Once the demons and monsters defeated the gods together.  The gods started wandering here and there, in deep distress.  Gods's mother Aditi was saddened by this defeat and started worshiping Lord Surya.  Lord Surya  pleased and appeared to Aditi.  He told Aditi - Devi!  Give up worrying.  I will fulfill your wish and with own thousandth part, I will appear from your belly and protect your sons. '  After saying this, Lord Surya became disappeared. 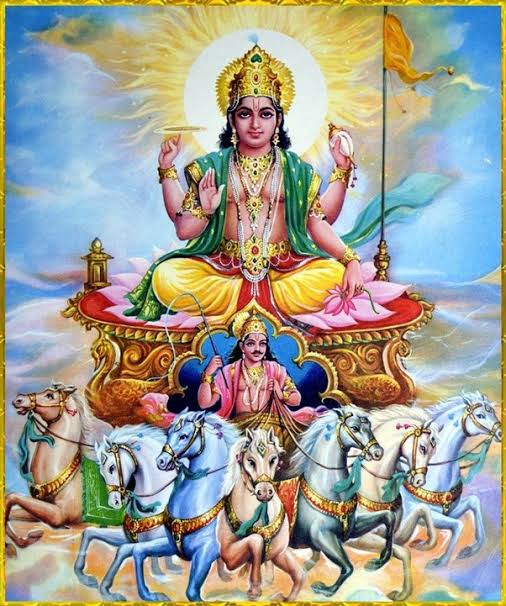 After some time, mother Aditi became pregnant.  Aditi started fasting for many types of fasts due to her love for the child and the desire for happiness.  Maharishi Kashyap said- 'Aditi!  You are pregnant, you should keep your body happy and healthy, but it is your wisdom that you are trying to destroy own child by fasting. Aditi said- 'Swami!  You should not worry.  My womb is the offering of sun power.  It is always indestructible. '  At the time, Lord Surya emerged from Aditi's womb and later he became the hero of the gods.  He slaughtered the demons.

The scriptures describe the Sun God in detail.  According to the scriptures of Hinduism, Aditya Lok is the abode of Sun God.  His vehicle is a chariot with seven horses.  He has four hands, out of which he holds the Padma(lotus) in two hands and the other two are in Abhay and Varmudra.

Surya Dev is considered to be very moving because it is constantly moving.  They are also considered as day-night creators and divisors of directions.  According to Hindu religious texts, the mother's name is Aditi and father's name is Maharishi Kashyap.  Their two wives are Chhaya and Sangya.  Shani is the son of Chhaya and Lord Surya. Shanidev is considered an enemy of Suryadev.  According to the legend, both of them fathers and sons never live together, and the greatest feature of Surya Dev Ji is that according to Hindu religion, he is the only visible deity in this world.

Surya Dev has two wives - Sangya and Chhaya from whom he received children.  Among these children, Lord Shani and Yamraj are considered to be the tribunals of mankind.  While the happiness and sorrow of human life depends on Lord Shani, on the other hand, the soul is liberated by Shani's younger brother Yamraj.  Apart from this, Yamuna, Tapti, Ashwini and Vaivaswat Manu are also children of Lord Surya.  Later Manu became the first ancestor of mankind.

The worship of Lord Surya is mentioned from the Vedic period.  Surya is described in the Vedas as the soul of the world and the eye of God.  Sun is recognized as the god of life, health and strength.  Life on earth remains intact by the grace of Suryadev. The sages and saints have described the rising sun as a god of knowledge and described the meditation and worship of the surya as extremely beneficial.  The worship of the direct deity Surya is considered fruitful soon. Lord Rama himself also worshiped Suryadev.  Be aware that the ancestors of Lord Shri Ram were also Suryavanshi.  Lord Krishna's son Samb was also able to cure leprosy by worshiping the suryadev.
Lord Bhaskar means worship of Suryadev, it gets a renewable result.  Pleased with the true spiritual practice, Lord Bhaskar blesses his devotees with happiness, prosperity and good health. According to astrology, the Sun is considered to be the first planet in the Navagrahas and the lord of Bhava Karma of the father.  Along with removing all the sorrows and diseases etc. related to life, those who do not have children, benefit from Surya Sadhana.  Surya Sadhana should be done for special benefit in father-son relationship.

Surya is a direct visible deity, who can be seen anywhere on earth. 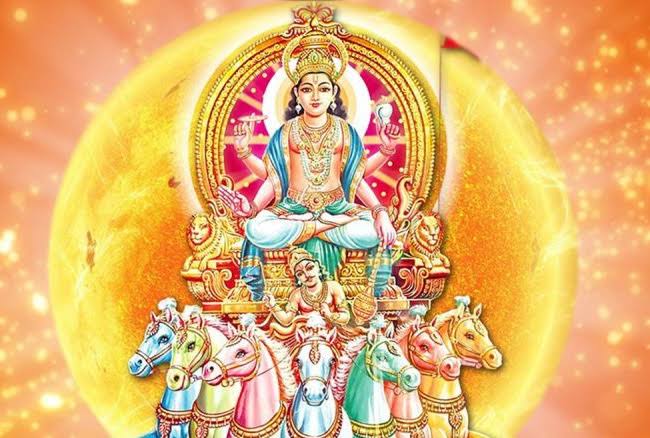 The vehicle of Lord Surya is a chariot with seven horses whose charioteer is Arun Dev.  The Sun God is riding on this chariot and spreading light throughout the world.The Suryadev rides a chariot with seven horses.  There are many stories about in the Puranas and indeed in the context of these seven horses. Inspired by them, various idols of Suryadev are also enshrined in the Sun temples, but all of them are made with their chariots. The giant chariot and the seven horses and charioteer Arundev driving it, is a description of the idol of the suryadev enshrined in any Sun temple.  The famous Sun Temple of Konark in India represents Lord Surya and his chariot quite well.

But aside from all this, a question is very important that after all why only seven horses are riding by the Sun God.  Why is this number no more or less than seven.  If we see the ride of other gods, then Arjuna's chariot driven by Shri Krishna also had four horses, then why the seven horses of the Sun God?  What is the history of these seven horses and what is this special in this seven number which was chosen by the Sun God itself.

If you look at a picture depicting a temple or mythological saga, you will see a difference.  Many times seven different horses are made in a picture or statue made with the chariot of the Suryadev, exactly as told in mythological stories, but sometimes the idols are made slightly different from it.

Many times the idol of the Suryadev is made by making seven heads on only one horse with a chariot.  This means that seven different horses originate from only one body.  Just as the sunlight brings out seven different colors of light.  For these two reasons, we can explain the reason why there are seven horses on the chariot of the Sun God. According to mythological facts, the chariot that the Suryadev is riding is run by Arun Dev.  On one hand, the command of the chariot is handled by Arun Dev, but even while driving the chariot, he sits while to see the suryadev.
The Sun is called the soul of the world in the Vedas. The sun is the soul of all the whole world. There is life on this earth from the sun itself, this is a universally accepted truth today.  In the Vedic period, Arya considered Surya to be the doer of the whole world. The Brahmavaivarta Purana considers the sun as a divine form.  The famous Gayatri Mantra is the based on Suryadev.  In the Suryopanishad, the Sun is the only reason for the origin of the whole world.  And he has been called the soul and brahm of the whole world.  According to the of Suryopanishad, the creation of the whole world and its observance is done by the Sun.  The Sun is the conscience of the whole world. Hence, it is no wonder that Suryopasana(Worship of Suryadev) has been prevalent in India since Vedic period.  Earlier it used to be done by Suryopasana Mantras.  Later, when idol worship was introduced, the Sun temples were built here.  In the Bhavishya Purana, the importance of sun worship and temple construction is explained in a conversation between Brahma Vishnu.
There is also a legend in many Puranas that Sree Krishna son Samb, who was suffering from leprosy due to the curse of sage Durvasa, worshiped the suryadev and got rid of this terrible disease.  In ancient times, many temples of Lord Surya were built in India. Today some of them are world famous.  The importance of the sun has been propounded not only in Vedic literature but also in Ayurveda, astrology, palmistry. The worship of Suryadev is mentioned in mythological scriptures.  The worship of Suryanarayana has been an ancient tradition of Sanatan culture.  Therefore, in the scriptures, the tradition of offering arghya to the Sun has been there since the beginning of creation.  Rishi-muni and deities have also worshiped the sun since ancient times. 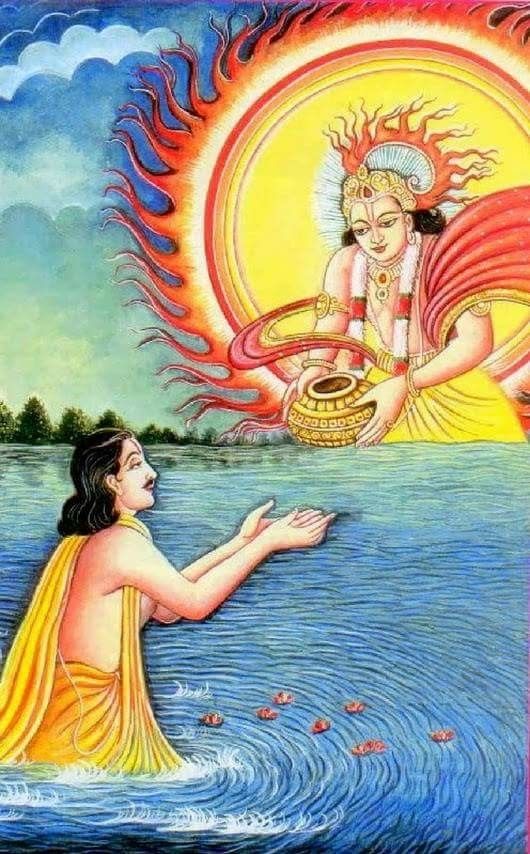 Earth creatures also worship the sun and thank them.  Therefore, worshiping Suryadev and offering them arghya eliminates all the sufferings and fulfills the desires.  Suryavanshi was the ancestor of Maryada Purushottam Shriram.  The sun has a special place in the Navagrahas.  He is called the king of the Navagrahas. Sunday is dedicated to the Suryadev.  On worshiping Lord Surya on this day, they gets his blessing soon.  Pleased by the devotional worship on Sunday, the direct visible deity Suryadev offers blessings of healing to his devotees.  In the Sanatan tradition, the worship of the direct visible deity Surya has been considered to give results soon.  To worship Suryadev, get up and take bath before sunrise.

The worship of Suryadev is done not only during the sunrise but also at the time of the sunset .  Lord Bhaskar's (sunset or evening ) worship is performed on the festival of Surya Shashthi.  Which we know as Chhath Puja.  On this day, giving ardhya to the Suryadev destroys the sins committed in any birth along with this birth. The purpose behind worshiping the setting sun is also that - "O Suryadev, this evening we invite you to accept the morning worship tomorrow and fulfill our wishes."

It is said that on his reactions the seasons are divided in the world.  In this way, this huge chariot of Lord Surya is not only related to mythology but also to scientific facts.