How lord Nara-Narayana destroyed the ego of Indra and Kamadeva.

How lord Nara-Narayana destroyed the ego of Indra and Kamadeva. 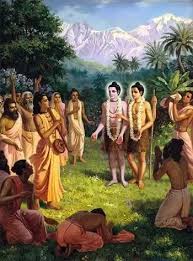 Lord Vishnu took avatar as the Nara-Narayana Rishis on earth to save the earth.  So know about this story…
There is mention of various gods and goddesses in Hinduism as well as many avatars taken by them from time to time and their leelas.  It is believed that Lord Vishnu has taken many avarars on the earth from time to time.  Out of which the number of devotees of Lord Rama and Shri Krishna is very high. But there were two more avatar of Lord Vishnu about whom we will tell you today. Narna and Narayan were two brothers who later propagated dharma on earth.
Lord Vishnu gave a boon to Shri Dharma and Ruchi that he would definitely be born in their house.  To fulfill this boon, he was born as Nara and Narayan as children of Shri Dharma and Ruchi. Lord Vishnu took avatar as two sages named Nara and Narayana through Shri Dharma's wife Ruchi. They were ascetic from birth.  So, after taking birth, they went to Badrivan to do penance.  Both sages penance leads to expansion of happiness and peace in the world.  Many sages-saints blessed their lives by receiving sermons from them.  Even today Lord Nara-Narayana continues in austere penance. They were took the avatar of Shri Krishna and Arjun in Dwapar yuga and destroyed the sinner from earth.
Nar-Narayan's tenacity was so strong that Devraj Indra himself started to be afraid of them. Once, seeing their fiery austerity, Devraj Indra thought that they wanted to take my Indrasana through penance. Because of this fear of his mind, Indra started making plans to dissolve the tenacity of Nar-Narayana. Therefore, he sent Kamdev and Apsaras to dissolve their penance.  But Kamadeva and Apsaras used to many attempt on them but had no effect on them. Kamadeva tried his best to distract Nar-Narayana with the help of the Apsaras, but they were completely unsuccessful.  Both were looking at Apsaras and Kamadeva with their divine eyes.
Kamadeva and apsaras start to tremble with fear of curse.  Seeing his condition, Lord Nara- Narayana said - You all do not affraid.  We welcome you all with love and happiness.
After listening to these words of Nara- Narayana, Kamadev was extremely ashamed and said that he did all this at the behest of Devraj Indra.  Kamadeva said, "You are completely knowledgeable and completely beyond the vices of Kama, keep your grace on us."
Great enlightened men become victorious on Kama due to the effect of serving your feets.  Gods have such a nature that when someone wants to rise above penance, then they disturbed his penance. They get angry even after conquering Kama.  Their penance is destroyed.  But you are Devadhidev Narayan.  How can Kama, angry ,disorders etc. comes in front of you? Please keep your blessings on us always.  This is our request to you. Lord Nara-Narayana was very pleased with the praise of Kamadeva and showed amazing leela through his yogamaya. Everyone saw that beautiful women like  Lakshmi were serving Nara.  Nar-Narayan said, you can take one of these women to heaven.
She will be the form of gem for heaven.  By obeying them, Kamadev departed with the best Apsara Urvashi among the Apsaras.  He went to Devsabha(Heaven) and introduced everyone to the incredible glory of Lord Nara-Narayana, hearing of which Devraj Indra was astonished and frightened. He felt special remorse over his thought  and misdeed towards Lord Nara-Narayana.
After seeing all this, Devraj Indra himself started to feel remorse and reached to apologize to Nar-Narayana.
Lord Nara-Narayana pardoned Indra and said that this is the land of Bholenath, by coming here all the disorders of the mind disappear.  You too should here do meditation to get the blessings of Mahadev. It is believed that Badrikashram is the place where Lord Shiva appeared to Nar-Narayana and Devaraja Indra.
According to the Hindu Puranas, the dharma was propagated on the earth by the penance of Nara-Narayana. It is also said that in Kedarnath and Badrikashram, Nara-Narayana still lives in austerity.
This is not a big miracle for Lord Nara-Narayana.  This shows the incredible glory of the effects of their tenacity.
By Shivgyaan at December 03, 2020