Narada-Character: 'Devarshi', who inspires towards the path of Moksha.

Narada-Character: 'Devarshi', who inspires towards the path of Moksha. 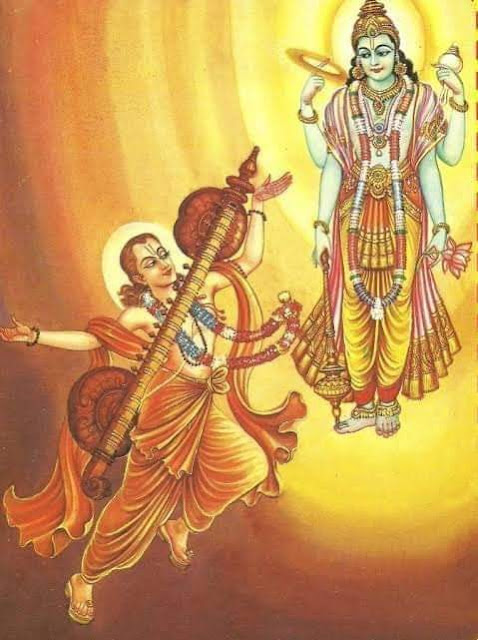 Who does not know Devarshi Narada!
But do you know the secret of Narada Muni's birth and his various births?
His glory can be understood in such a way that in Dwapar Yogiraj Shri Krishna tells Narada in the Devarshis his own glory.  Apart from this, there is definitely a mention of Narada somewhere in the scriptures of Vedic literature, Ramayana, Mahabharata, Purana etc.
Let us go to the story of Devarshi Narada, who wanders freely in the universe:

When Parampita Brahma gave a 'curse' to Narada.

According to the statements mentioned in Brahmavaivarta Purana, Devarshi Narada is the Manasaputra of Parampita Brahma.  It is said to he has originated from the gorge of Brahma.
It is said that when Brahma, the creator of the universe, ordered Narada to go to earth for the work of creation, Narada did not obey him.
The reason was that Naradji considered subject-enjoyment to be a major obstacle in god-hymn and in his attainment.  According to him, indulging in service of God was like nectar and subject -enjoyment was like poison.
However, Brahma cursed seeing his disobedience.
As a result of this curse, along with the loss of knowledge of Narada Muni, he was to gain Gandharvayoni, in which he would be subjugated by sex.
Naradji became unhappy after getting the unprovoked curse and prayed to his father and said, 'How is it fair to curse the bright son?'
Nevertheless, Brahma must have such a blessing on him that 'Whatever I will born in the yoni, there should never leave me devotion to God.
Unhappy with his father, Narada Muni also cursed Brahma and said -
"O Parampita!  You have cursed me without offense, so I also curse you that you will not be worshiped in the world for three kalpas and your mantras, stotra, kavavha etc. will be disappeared. "
After the curse of both father and sons, the sequel of this story comes in the context of Narada's various births.

Story of various births of Narada

Narada was born in the Gandharva yoni as a result of his father's curse.
Then his name was Upbaharna and he was as beautiful as Kamadeva.  He was also very proud of his form.  It is said that once the deity and Gandharva came to Brahmaji's assembly to make God-sankirtana.  Upbaharna also went there with his wives.  In the Bhagavad bhajan also, the Upbarahan was behaving in a lustful manner due to the effect of the curse.  Seeing this, Brahmaji cursed Narada (Upbaharna) to be a Shudra.
The story begins from the second birth of Narada Muni.
After this, Naradji was born into a Shudra family.  Coincidentally, after birth, his father was died, while his mother used to work as a maid of a devout Brahmin.
In this birth, Naradji was a virtuous, sober and serious child.  It is said that when Naradji was only 5 years old, then one day some sages came to the village for Chaturmasya.  At such a time, Narad Muni used to serve the Mahatmas with a lot of heart and was equally engrossed in listening to the Bhagwat kathas.
In this way, all the defects of child Narada's heart were removed due to satsang and his mind became pure.  When the sages started going after the end of the Chaturmasya, seeing the humility of Dasiputra (Narada), they gave knowledge of chanting the name of God and meditation of the form of the Supreme Father(God). '
His mother later died of a snake bite.
Then, at the age of five years, Narada Muni proceeded towards the north depending on God.  While walking, the senses became relaxed, then under a peepal tree, he sat in a posture and meditated on God.  It is said that as a result of devotion, God suddenly appeared in his heart.
After that, as a child, Naradji tried to meditate again and again to get a glimpse of God, but he did not see him again.
But through an Akashvani, his mind remained in the Lord even later and one after the other and then he got freedom from the fifth mortal body too.
According to the stories, at the end of Kalpa, when Lord Vishnu was resting in the Kshirasagar, at the same time, Brahmaji started entering with the entire universe for sleep in his heart.  Just then Narada entered Brahma's heart with his breath.
After Brahmaji arose after Sahasra Chaturyuga and he started creating the universe, Naradji along with other sages from his senses emerged as Brahmaji's manasaputra and by the grace of God, Narayan-Narayan keep  singing while playing the Veena with this unbroken celibacy.

All the compositions composed by Devarshi Narada guide the devotees in this universe.  In this, what is said in Srimad Bhagwat in relation to 'Naradpancharat', its importance is clear -
In the creation, Lord Vishnu took the third incarnation as the Devarhi Narada and preached Sattvata-tantra (Narada-Pancharatra).  In this book, there is a detailed description of how to get rid of Karmabandhan.
In addition there is a Upanishad by the name of Naradji, called ‘Naradparivrajakopanishad’, which is believed to be associated with the Atharvaveda.  Apart from this, if we talk about Narada's compositions, then in the Shantiparva of Mahabharata, Shukdevji has been taught spiritualism by Naradji.
Later it was known as 'Naradgita'.  Along with this, 'Narada-Smriti' and 'Narada Shiksha' scriptures composed by Narada are also very popular.
Without the discussion of Naradpuran, talk of Narad Ji's compositions will be incomplete.  This Purana is also known as an Encyclopaedia (Encyclopedia).
Since Devarshi Narada has been the guru of Ved Vyasa, Maharishi Valmiki etc., it can also be said that by the grace of Munivara Narada, specific texts like Ramayana and Srimad Bhagwat have been attained to the world.

… … Whom Devarshi Narada showed the path of ‘Moksha'.

In this context, it would be appropriate to mention an interesting reference.  Once Maharishi Ved Vyas got very sad with Narada Muni and said, 'O Muniver!  I have described the essence of the four Vedas in the Mahabharata-text, a compilation of Puranas.  Why am I not getting satisfaction even after doing so much? '
Devarshi Narada while addressing Vyasa ji, said that - 'You have not sung the glory of God in your text.  Narada Muni further added that "that knowledge is incomplete in which the sacred glory of Narayana is not described."
Then Maharishi Veda Vyasji composed Bhagwat Samhita with the leela of God.
Narada ji's leela is not even here, but behind the devotion of the brave child Prahlada was the confidence generated by Narada Muni.  When Dhruv was going to the forest, hurt by the bitter word of step mother, Naradji gave 'Vasudev Mantra' to him.
All such examples are present in the universe, from which it is known that Narada Muni led the way to many  people and led many to the path of devotion.
why Narada Muni does not stay anywhere?
There is an interesting story behind it.
Once Daksha Prajapati produced ten thousand sons named 'Hariyashv', he also ordered them to expand the universe.  Meanwhile, by force, Devarshi Narada taught spiritual lessons to those sons and in this way they became disgusted.
Due to this, Daksha Prajapati was very sad, but he did not give up and reproduced a thousand sons named 'Shabalaksha'.
Even where Naradji was also interested,  again he also turned 'Shabalakshas' towards the feet of God.  This time Daksha Prajapati became angry and cursed Narada that 'you will not be able to stay in one place for much longer'.
Apparently, due to this reason, Narada Muni does not stay in one place.
You will be surprised to know that arrogance had also taken place in Narada Muni, who was so great ascetic and steeped in piety.  It sounds strange to hear, but the stories that say… say so.

Story related to Narada's ego will be published on this blog in a day or two.