Kansa: The story before Krishna's birth . 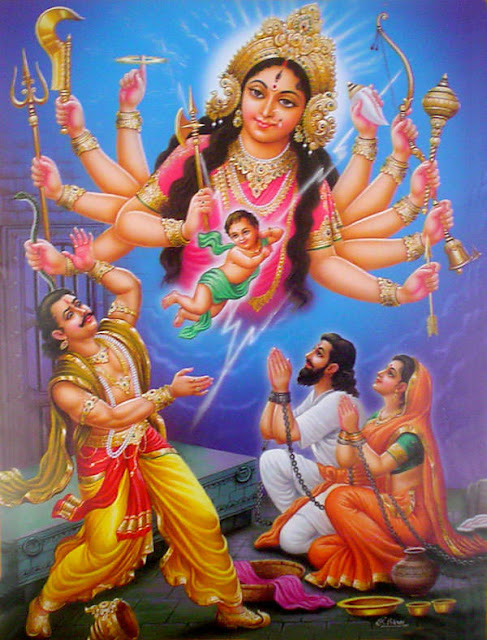 Kansa is one of the biggest villains of our Indian mythology.  His sins were so strong, ruthlessness so intense and tyranny was so inhuman that Dwapar yuga was shivering in his name. He found the name of Kansa Mama in history by ruthlessly killing six children of his own sister Devaki.  Even today, when a maternal uncle crosses the limits of his relationships, he use to received the title of Kansa Mama.
It is also known to famous in world that Kansa really loved his sister Devaki very much.  His love for Devaki was so intense that Kansa himself carried his sister's doli (palanquin) on his shoulders at the time of her departure after marriage. Kansa was frightened after the listening of Akashvani, which announced that, he will be killed by Devaki's eighth child. And he committed atrocities, which cannot be compared to anyone in history nor imagination.
Despite being children of religious parents, how did such devilish tendencies awaken in him.  He loved his sister more than life ,but how he could torture her?  The answer to all these questions is one and it is astonishing - Kansa was not the real brother of Devaki!  how,
When it comes to the villains of mythology, the name of 'Kansa' definitely comes.  This is also important because the first enemy character of Shri Krishna's leelas was the same.  But in the stories, Kansa's character is described during the marriage of Devaki-Vasudeva and Krishna's birth. Who was Kansa before this and where did he come from is a different story.  In mythology too, the character of Kansa was expanded since the birth of Krishna, while there has been a big reason for his tyrannical nature. Not only sister Devaki and her husband tolerate of his atrocities, but the mother who gave birth also kept burning in that anger and ego. So let us know that mystery of Kansa, which is before Krishna's birth!

Kansa was an Asura in his previous life!

There is no doubt that Kansa was powerful and had immense knowledge of weaponry.  On his strength, he ruled in Mathura for years.  But this is a matter of thinking that how can a human being be so cruel that his own sister, brother-in-law, parents can be imprisoned. Try to kill the unborn nephew.  He wreaked havoc on the public and did all the work that indicated demonic tendencies.
The mystery really starts to open from here.  The secret of Kansa's demonic instinct is tied to his previous birth.  Kansa was born in the demon dynansty before being born in Dwapara Yuga.  His name was 'Kalnemi'.  Kalnemi Asura's father's name was Virochan.  Even powerful gods were afraid of his devilish tendencies. He had many skills.  He was well versed in armaments and tantra lore.  When the Devasur war had taken place, Kalanemi, while sitting on his lion, fired a trident at Sri Hari with great speed.  But Lord Hari survived his attack and caught the trident coming towards him.
Later Kalnemi was killed with the same trident.  When Kalanemi was slaughtered, the gods became tension free.  But Sri Hari told that one birth of Kalnemi has ended.  His devilish tendencies will wreak havoc again in the Dwapar yuga. Hearing this, the gods became frightened again.  Then Shri Vishnu assured them that when devilish tendencies will expand on earth, I will incarnate in human form to establish dharma.  Only then will he be killed once again.
Shree Hari's  foretelling came true and Dwapara Yuga has arrived.  It has been told in history that this was not true on the birth of Kansa , that he was born in Yaduvanshi king Ahuk's son Ugrasen.  Kansa was born to Ugrasen's house and he was called his father.  But Kansa's real father was Gandharva and his name was Drmila.
According to the legend, Ugrasen was married to Pawanrekha, daughter of King Satyaketu of Vidarbha.  Both King Ugrasen and Pawanrekha were highly religious.  They were always absorbed in the worship of Shri Vishnu.  During this time, people also used to worship Lord Vishnu. Then there was no anger, there was no hatred in anyone.  His adminstration was going well.  There was a lot of love between the king and queen.
Rani Pawanrekha was very beautiful and her playful and cheerful nature was popular among all.  A few months after marriage, Rani reached her maternal home.  Where she was roaming in the park with her friends.  Then Gandharva Dramila saw the her beautiful form.  Godila is also another name of Dramila.  When he saw the queen, he tried to get her at all costs.  He first tried to attract the Pawanrekha by his nature.  But when this did not happen, he used the elusive power to hypnotize the queen. In this way, the relationship between Drmila and Rani Pawanrekha was established while remaining confidential from the world.  After some time, the effect of hypnosis on the queen ended and by then Dramila had also left.  Rani did not remember anything about Dramila.