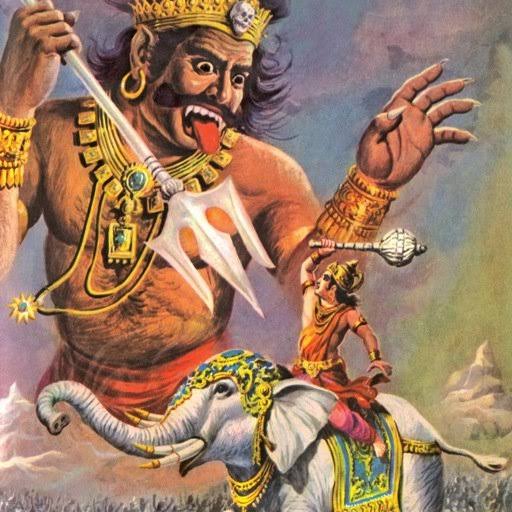 Once upon a time - a beautiful program of music & dancing was going on in the assembly of Devraj Indra.  Devguru Brihaspati reached in the during of the program.  Indra thought - such good music is going on, if I wake up in the middle, then there will be an obstacle in the music, if I do not wake up, Guruji will get annoyed. What should I do?
Thinking this, Indra ignored him and started looking at the other side.  He acted as if he had not seen Guruji.
Due to such behavior of Indra, Guruji got angry and left the gods.  Here when the demons came to know that  Devguru of the gods were angry with them, the demons attacked and defeated the gods and took away heaven from them.
Gods pray to Brahma Ji .
The deity became an orphan without a guru.  They could not see any support.  Then they went to Brahma ji.  Brahma ji rebuked then and said - You all have done this very wrong thing. The biggest crime is to annoy the Guru. Now, until you find a Guru, you accept "Vishwaroop" as guru, who is the same as Devguru Brihaspati in virtue, make him a Guru.  But his mother is of Asura dynasty, so sometimes he can favor Asuras - if you ignore this thing and walk it will become your job.These sutras(theory) are also for our life - which has many qualities and if there are one or two defects then we should learn to ignore them, only then you will be successful in life.

Gods reachieve the kingdom of heaven .

The gods made "Vishwaroop" a guru.  Vishwaroop performed the ritual of "Narayana Kavach" by Indra.  Now the Dev-Asura War took place. The gods emerged victorious due to the "Narayan Kavach".  The kingdom of heaven was again gotten to Indra. Now Indra started a yajna to protect the kingdom.  At the time of the yajna, Indra saw that Guru Vishwaroop was offering Ahuti(sacrifice) in favor of the gods in a manifest form and also in favor of the asuras in a covert form.  Indra got angry.  He raised the Vajra and cut Vishwaroop's head.
Ritual done by Vishwaroop's father for wishing to kill Indra.
Vishwaroop's father "Tavashtha" became angry when Vishwaroop died.  He started performing rituals to kill Indra.  He was vow to have receive a son by Havan(yajna) , who can kill to Indra. But due to inaccuracy of mantra's pronunciation, yagna produced a son.  But he was not to kill Indra, probably he was born to die at the hands of Indra.
Here it can be understood - the subject of ritual is difficult but devotion is simple.  If anything goes wrong in devotion, God takes care of us, but if there is something wrong in the ritual, it is our responsibility.
This son of Tvashtha, who was born from the yajna, surrounded all the worlds with his huge body, hence his name was "Vritrasura".  When Vritrasura roared, all the gods attacked on him.  Vritrasura grabbed those weapons which was used by gods and finally broke and ate them.
Now the Gods panic - he break the weapon and eat it, who will kill him?  The gods ran away and started praising God.

Lord Vishnu tells the gods to solution of Vritrasura slaughter.

Lord Vishnu appeared and said - Listen, Indra!  There is a solution but it is difficult to do.
Indra said- You just tell me the solution, it is my job to do it.
God said - If Vajra is made from the bone of Dadichi Rishi, then Vritrasura will be killed.  But Dadichi Rishi is alive, bone will be found when he sacrifices.
Indra said - God!  You have told the solution, now it is my job to ask for bone from Dadhichi sage.
Now Indra reached Dadhichi Rishi, bowed and said - Rishivar !  I want your bone.
Dadhichi said - Indra, didn't you consider it?  If God asks for the bone of the person who wants to survive, then he can refuse to give it.
Indra said- I understand that it is unfair for me to ask for your bone, but the problem is so severe that I am forced to ask for it.  If you give your bone, then the life of all the gods will be saved.
The Dadhichi sage meditated on the Lord Shiva and renounced his body through yoga.  After that Indra made a Vajra from the bone of the Dadhichi sage.
The war between  Indra And Vritrasura.
After attaining Vajra, the gods were filled with enthusiasm.  All the demons who come with Vritrasura started running due to fear.  Here Vritrasura shouted loudly and moved towards Indra. Indra used his gada(mace).  Vritrasura strikes the forehead of Airavat, the elephant of Indra with his left hand.  Due to which Airavat's forehead exploded.
Indra was afraid.  There is Vajra in his hand, which is made from the bone of the Dadhichi sage, yet he is afraid that,what happen if it will be wasted like mace.
Vritrasura says- Indra!  Why are you not using Vajra?  Don't think that mace like Vajra will be wasted.  There are three powers in the Vajra - 1. Lord Narayana 2. The penance of Sage Dadhichi 3. The destiny of Indra.  You strike!  You will surely get success.
Indra, I am happy in both situations - even if victorious, I will avenge my brother.  Happy even if defeated because after dying this my physical body will be used by animals-birds  and I will leave this body and go to Vaikuntha dham.
Indra panicked after hearing this. Now he unable to attack with Vajra.
Vritrasura says- As long as you are not striking Vajra,then I meditate on my God.  Vritrasura closes his eyes and reaches Bhava Samadhi(spiritual stage). Talks to God- Lord!  After some time, leaving this body, I am going to come at your feet, I am going to come to your abode.  I know the outcome of this war, what will happen?  Indra will win, I will be defeated in this war.
God said - But I never let my devotee be defeated.  How did you think that you will be defeated?
Vritrasura smiles- Lord!  I know, whoever wins, he will get heaven and who will be defeated, he will get Baikunth.  You will not give small things to your devotee!  Therefore, I know that I will be defeated in this war.
Slaughter Of Vritrasura
When Vritrasura came out of Bhav Samadhi(spiritual stage), he sees that Indra is standing with Vajra in his hand.  Vritrasura said- "Indra!  Have you come to war, or come to see me?  Strike with Vajra at me ! "
Indra says- O Demon king Vritrasura!  We gods call you demon, but you look like a perfect mahatma(great soul).  Even in this adverse situation, so much loyalty, so much love for God, so much love is not seen in the great siddhas mahatma(great soul).  You are a proven great divine soul.
After this, Indra attacked Vajra on Vritrasura.  Vritrasura's head was severed from the torso.  A divine light came out and went to the abode of God.
Lessons from the story
(a) ● One should always respect the gurus and respectable people, otherwise our age, strength, intelligence, sharpness are diminished.
(b) ● If you do some puja, yagya with some wishes and if there is some mistake in the pronunciation in mantras, then its reverse results  happens, but if you do devotion with the utmost sense then God forgives all the mistake.
(c) ● The devotee has so much faith in God that even under adverse circumstances he is not afraid.  Vritrasura has so much love for God that he was not afraid at all.

This is a short story of Vritrasura… which is also mentioned in the Shri Bhagwat Purana, Ramayana, Shivmahapurana, Mahabharata…. It is also necessary to know why Vritrasura was a devotee of God even when he was a demon….  I will definitely write this topic in future . Currently, you all to know that Vritrasura was cursed by Mother Parvati.
By Shivgyaan at December 31, 2020

Goddess Parvati told Lord Shiva that she needed her own palace We all know that Sri Hanuman had set fire to Lanka.  But do you know that all... 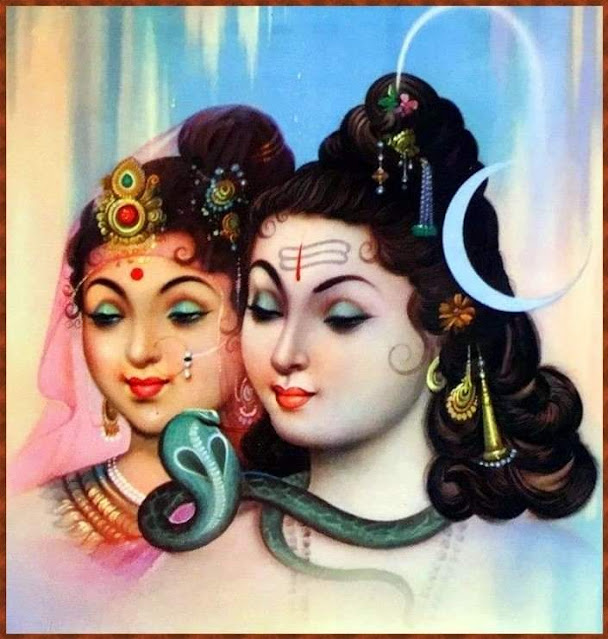