What caused controversy in Ganga and Saraswati

What caused controversy in Ganga and Saraswati.

In the scriptures and the Puranas, Saraswati has been called the goddess of knowledge.  This goddess of knowledge once did something that no one could even imagine.
Due to that one mistake, Goddess Saraswati got such a curse that she become river had to descend on the earth.  The result of this curse was that  maa Ganga also became a river and Goddess Lakshmi became the beloved Vrinda i.e. the basil plant. 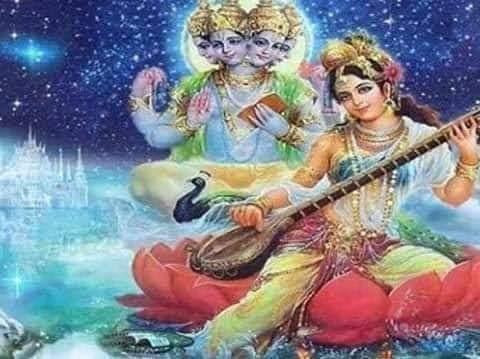 The desire to write any specific information on Goddess Saraswati was arising in my mind for a long time.  So today I will tell you about a dispute between Goddess Saraswati and Goddess Ganga.  This story is found in some mythological texts.  According to the story, Lord Vishnu had three wives - Lakshmi, Ganga and Saraswati. The trio always use to tried to keep Narayan happy so that they could get his special love.  Goddess Lakshmi and Mother Saraswati became jealous once upon seeing Srihari's greater love for Goddess Ganga.  On this Lakshmi ji did not say anything, but Saraswati ji told lot of maledictory to Lord Vishnu for this bias.
Lakshmi maa tried to stop her, but due to anger she continued to reproach Narayan the same way.  She also called Goddess Ganga as a misogynist.  Fed up with this quarrel, Lord Vishnu went out of Vaikuntha for some time. Saraswati felt very sad to see Narayan going out like this, but she also understood the reason for this activity to Goddess Ganga.  In the same anger, she was ready to hit the Ganges.
Seeing this sin, Lakshmi could not stay away from this matter and she came in between them.  She tried to calm them down by explaining both.  Goddess Ganga calmed down due to this, but the anger of Saraswati increased further.
Thus, due to coming in the middle, she got angry and cursed Lakshmi to become a tree.  Goddess Lakshmi immediately turned into a basil plant due to the curse of Saraswati.  Seeing innocent Lakshmi being cursed in such a way, now Ganga was also angry.  She cursed Saraswati to become a river and flow on the earth.  Unhappy with this, Saraswati also cursed Ganga to become a river and carry the ash & bones of humans.
When Lord Vishnu came back, he came to know about the curse of Saraswati and Ganga.  At the same time, seeing Lakshmi transformed into a plant, he felt immense sorrow.  Due to the calm nature and well-being of Goddess Lakshmi, he thought it appropriate to keep her with her as his wife. Thinking that such a situation could come back, he decided to sacrifice Goddess Ganga and Goddess Saraswati.  When both came to know of this, they apologized to Lord Vishnu. Then Srihari said that the Ganges will descend on the earth to wash away the sins of humans.  At the same time, she will stay in his feet as partially, in the kamandal of the Shree Brahma and also in the jatas of Mahadev.  Saraswati will also flow with her on the earth and will also live with him as a partially. Only Goddess Lakshmi will live in Baikunth, becoming his wife completely.  Along with this, he also took the form of Shaligram and marry the Tulsi form of Goddess Lakshmi.  It is said that Ganga and Saraswati have been flowing on the earth as a river due to each other's curse since then. Goddess Saraswati's curse has ended, that is why she has returned to her abode and Goddess Ganga will also be completely disappeared by completing her curse by the end of Kali Yuga.  But even today, the confluence of Ganga and Saraswati can be seen in Prayag.
This story can be read in detail in Brahmavaivart Purana and Devi Bhagavata Purana.
By Shivgyaan at September 22, 2020