You must have heard the name of Vaishno Mata of Jammu.  Today, I am telling you the story of her, which is listened and heard in Jammu and Kashmir for years. 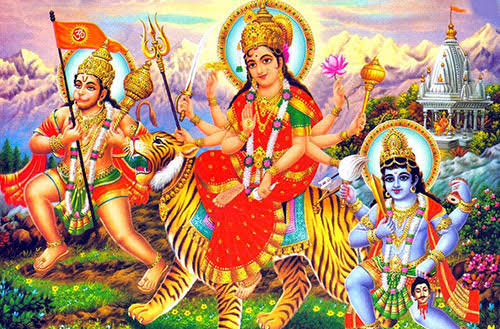 It is believed that once the mother of the mountains, pleased with the devotion of her supreme devotee Pandit Sridhar, saved his respect and gave proof of her existence to the whole creation. 2 km from present-day Katra town's in the village of Hansali situated at a distance of, Pandit Sridhar, the supreme devotee of mother Vaishnavi lived. He used to be sad because he was childless. One day he called for kid girls to worship Navratri.  Mother Vaishno herself sat among them in disguise as a girl. After the worship, all the girls went away, but mother Vaishno Devi remained there and said to Shridhar - 'Invite everyone to your home Bhandara'. Sridhar agreed to that divine girl and Bhandara's message gave the nearby villages.
While returning from there, along with Baba Bhairavnath ji, he also invited his other disciples for food. All the villagers were surprised to get the invitation of food, which girl is she who wants to get food to so many people? After this, many villagers came to Sridhar's house and gathered for food. Then the girl 's form mother Vaishno Devi started serving food to everyone with a amazing pot.
While serving food, the girl went to Bhairavnath.  Then he said that I would rather eat meat and drink than kheer-puri.  Then the girl's form mother explained to him that this is the food of the Brahmin's house , here does not use to eat meat. But Bhairavnath deliberately kept his point and stand for this matter. When Bhairavnath wanted to catch the girl, the mother knew his treachery.  Mother changed into air and flew towards Trikuta mountain.  Bhairavnath also followed her. It is believed that there was always Pawanaputra Hanuman stay around  to protect the mother.  According to the belief, at the time also Hanuman was with her to protect mata. When Hanuman ji felt thirsty, at his request, Mata drove an arrow from the bow on mountain and drew a stream and washed her hair in that water. Today this holy water stream is known as Banganga, whose drinking or bathing of holy water removes all the tiredness and suffering of the devotees. During this, Mata entered a cave and meditated for nine months.  Bhairavnath also followed her and came there. Then a sage said to Bhairavnath that what you consider a girl is Adishakti Jagadamba.  So give up the pursuit of that superpower. Bhairavnath did not listen to the sage.  Mata then made her way out of the other side of the cave.  This cave is still famous as Ardhkumari or Adikumari or Garbhajoon. Before the Ardhkumari is also mother's charan paduka.  This is the place where Mata turned around and saw Bhairavnath. Out of the cave, the girl assumed the form of a goddess.  Mata warns Bhairavnath and asks him to return.  Still he did not agree.  Mata went inside the cave.  Then Hanumanji fought with Bhairava outside the cave to protect Mata.
Bhairav ​​still did not give up, when Veer Hanuman started becoming weak, then Mata Vaishnavi took the form of Mahakali and killed Bhairavnath.  The head of Bhairavnath was beheaded and fell into the Bhairav ​​valley of the Trikuta mountain, 8 km from the Bhavan. That place is known as the temple of Bhaironath.  The place where Mother Vaishno Devi killed the stubborn Bhairavnath is famous as the Pavitra Gupha(holy cave) or 'Bhavan'.  At this place Maa Kali (right), Maa Saraswati (middle) and Maa Lakshmi (left) are entombed in the cave as Pindi. The combined form of these three is called the form of Mother Vaishno Devi.  Along with these three grand pindis are statues and yantras etc. installed by some devout devotees and former kings of Jammu Kashmir.  It is said that after his slaughter, Bhairavnath repented of his mistake and begged for forgiveness from the mother. Mata Vaishno Devi knew that Bhairava's main intention behind attacking her was to attain salvation, she not only liberated Bhairava from the cycle of rebirth, but gave him a boon saying that my darshan will not be considered complete till then, Unless a devotee will see you after me. According to the same belief, even today, after visiting Goddess Maa Vaishno Devi, the devotees go uphill to climb to see Bhairavnath by covering  8 kilometers.  Meanwhile, Vaishno Devi assumed the shape of a rock with three pindi (head) and meditated forever. Meanwhile, Pandit Sridhar became impatient.  He headed the same way towards Mount Trikuta, which he had dreamed of, finally he reached the cave gate, he made her rituals of worshiping the 'Pindis' in many ways, the goddess was pleased with his worship, she was in front of him.  Appeared and blessed him.  Since then, Sridhar and his descendants have been worshiping the goddess Maa Vaishno Devi.

The glory of Maa Vaishno Devi located in Jammu is incomparable.  The devotees reach the levee of Maiya with their wishes. Bhaktas Vatsala Mata loves her devotees like her children and fulfills wishes.  No one devotee returns disappointed from the levee of the devout mother.  Mother Vaishno Devi sits on the 'Trikut Parvat' as the three pindis of Mahakali, Lakshmi, and Mahasaraswati.  Where every year many devotees come to see the mother and climb hard steps of hill.


The Ashuras did tortured many times on the earth and when the earth started sinking from the burden of their atrocities, then the divine powers incarnated in the divine form and have liberated the earth from sin . Once Maa Lakshmi, Maa Kali, and Maa Saraswati decided to create a Divya Kanya(Divine Girl) with all their powers to end the tyranny of the Daityas in the Treta Yuga and to protect the saints. A girl appeared from the divine light coming out of their eyes, with a trident in her hand and situated on the lion .  Looking at the three great powers, the girl said, "O great powers, why have you generate me, please tell me what is the purpose of my creation."

Then the three great Goddesses said - O girl to protect the dharma and to destroy the iniquity, we have produced you, now you obey us and take birth in South India as the daughter of Ratnakar Sagar.  There you will be born out of the part of Lord Vishnu, you will do the work of righteousness by self inspiration.
Taking the permission of Mahadevis, the divine girl went to Sagar's house at the same time and got situated in the womb of his wife.  That girl was born on time.  The face of that girl was amazing and supernatural like the Sun.  Ratnakar Sagar named that girl as Trikuta. In a few days Trikuta attracted all the sages to her with her divine powers, that is, all the sages started considering her as a divine avatar.  Trikuta used to worship Lord Vishnu very strongly and ascendant, for this reason everyone called her Vaishnavi.

When became 9 years old she came to know Lord Vishnu has incarnated in this earth as Lord Shri Ram . Then she considered Lord Rama as a husband and decided to do hard penance to get him.

After a few more days, Trikuta went to the beach to meditate with the permission of her parents.  She started living in a small hut disguised as a Sadhvi.
In those days Shri Ram's wife Sita was abducted by Ravan.  One day while searching Sita, Shri Ram ji, with his Vaanar sena, came there and saw that divine girl meditating and said - O beautiful lady, what is that reason or what is the purpose for which you are doing such austere meditation.

Trikuta opened her eyes when asked by Shri Ram, and Shri Ram Ji is standing with his brother Laxman and Hanuman.  Seeing him, the joy of Trikuta was not limited.  After she greeted the Lord with happiness, she said with a gracious gesture - To receive you as husband is the reason of my penance.  Therefore, please adopt me and give me the results of my penance.

Then Lord Shri Ram Ji said - O Sumukhi, in this incarnation, I have decided to be  kept one wife.  Therefore, I cannot fulfill your desire in this birth, but you have meditated hard for the purpose of achieving me, therefore I promise you that while returning from Lanka with Sita, I will come to you in change disguise form and at that time if you will recognize me.  Then I will adopt you. 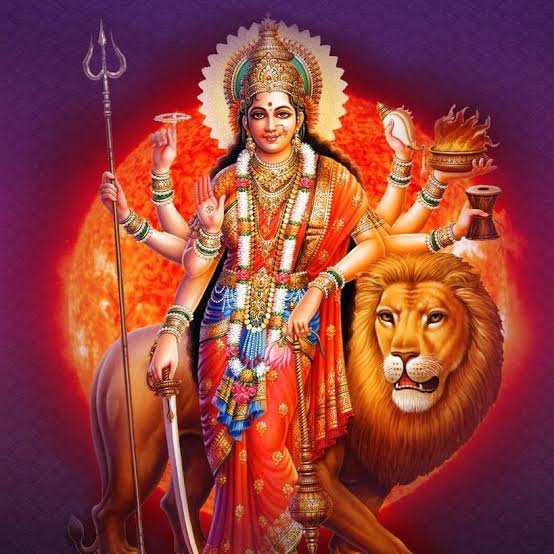 Shri Ram ji went towards Lanka with his army.  In Lanka, he had a fierce battle with Ravan and eventually Ravan died.  After that riding on Pushpak viman were coming  with Sita, then he stopped the viman and said to Sita and Laxman - you all stay here, I will come in a while. After that Shri Ram Ji took the form of an old monk and reached in front of Trikuta, Trikuta could not recognize him, then Shri Ram Ji appeared in his real form and said - O Devi, according to the earlier statement you failed the test. Therefore, you meditate for some time, when I will be incrate 'Kalki avatar' in the Kaliyuga, then you will become my companion, at that time in the three peaked Manorama cave on Manik mountain in North India, where the three great powers reside there you will also stay and become immortal.  Mahabali Hanuman will be your guard and you will be worshiped all over the earth.  In the name of 'Vaishno Devi', your world glory will be famous. 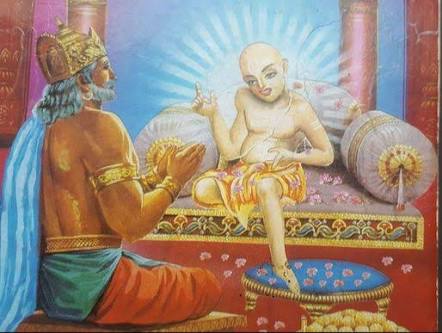