To write the Mahabharata of Ved Vyas, Lord Ganesha had laid this condition and got a name Ekadanthari,

To write the Mahabharata of Ved Vyas, Lord Ganesha had laid this condition and got a name Ekadanthari, know the whole story

Ganapati Bappa is the most popular deity among the deities, who is worshiped by devotees in many beautiful forms and names, and the stories associated with his name are equally interesting.  One such name of Lord Ganesha is Ekadanthari, behind which there are not one, but three stories. 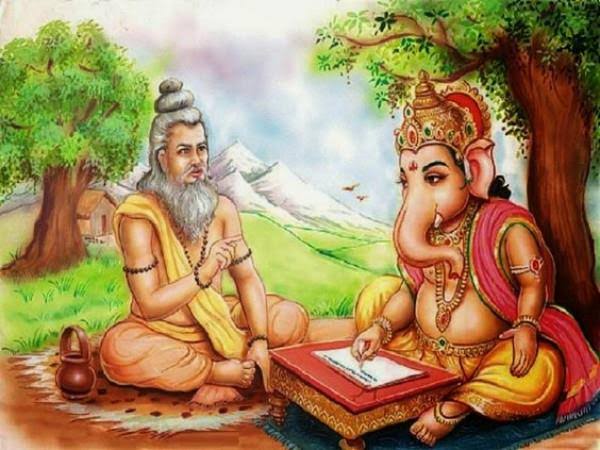 A story of his being called Ekadanthari is found in the Bhavishya Purana, according to which his elder brother, Kumar Karthikeya, broke his teeth in childhood due to his naughty behavior .
The second story is that he had a broken tooth due to Parashuram ji's ax .. Apart from these, there is a third and interesting story.
Ganesh ji made a pen by his teeth
According to the third legend, all the gods were troubled by the terror of a monster named Gajmukhasura.  After which they requested Gajanan to kill that monster.  According to beliefs, Ganesh broke his teeth and challenged Gajmukhasura for the war.

Gajmukhasura, upon seeing his death near, took the form of a rat and started running here and there.  Then, holding him, Ganesh made his vehicle.
Apart from these, there is a fourth and interesting story
Whose context is related to Mahabharata.  Everyone has known this writing of Mahabharata by Sri Ganesh, but before writing Mahabharata, he had placed a condition in front of Maharishi Ved Vyas, but few people know about it.  This condition is related to the interesting subject of Shree Ganesh being called Ekadanthari….
For the creation of an epic named Maharishi Ved Vyasa Mahabharata, he was looking for a writer who would not interrupt the pace of his thoughts.  In this sequence, he remembered Lord Ganesha, the lord of wisdom, and insisted that Shri Ganesh be the author of his epic.  Ganesh ji agreed to him, but also placed a condition.
Sriganesh had told Maharishi Ved Vyas that if my pen does not stop even for a moment while writing, then I can become the author of this book. Then Ved Vyas ji would say some such verses that it would take some time for Shree Ganesh do not write without understand them .. Meanwhile, Maharishi Ved Vyas used to do other things.
In this way, two maharathis started to play their roles sitting face to face together.  But in the meantime, an incident happened .. Maharishi Vyas started speaking the story at a very fast pace just to break the pride of Ganesha .. And at the same speed Lord Ganesha continued to write the epic, but due to this speed immediately  Ganesh ji's pen broke, he failed to keep pace with the speed of the sage.
Giving up in this situation, Ganesh ji broke one of his teeth and continued to write it by dipping it in ink. Seeing this, the sage understood that Gajanan's quick wit and dedication was no match and he gave Ganesha a new name Ekdanta.  At the same time, Ganeshji also understood that he had become a little proud of his writing speed and he was underestimating the ability of the sage.
After both sides accepted each other's strength, ability and intelligence, the work of writing the epic began to take place with equal passion and energy.  It is said that this epic took three years to complete. In these three years, Ganesha did not stop the sage even for a single moment, while Maharishi also fulfilled the condition.