Ganesha, the second son of Lord Shiva and Parvati, has been called Vighnaharta and Vinayaka. Therefore, Ganesh ji is about to remove from every dilemma.  Then what happened that he had to take help of Narada ji?  Let us know: - 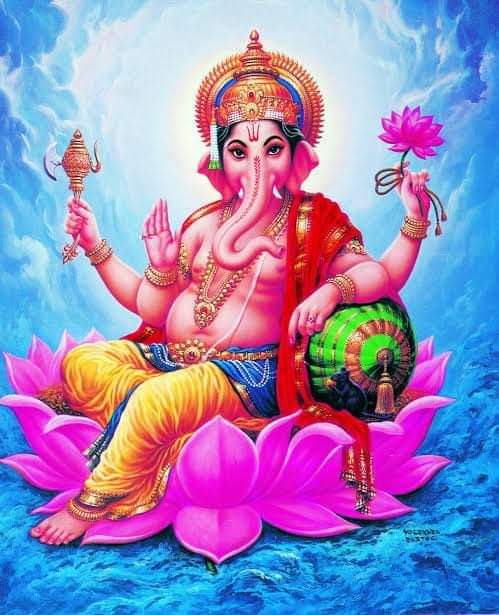 Once there was an atmosphere of ecstasy in heaven.  It was the festival of the marriage of Lord Vishnu and Lakshmi.  All the gods started busy in preparations.  Lord Vishnu started sending invitations to everyone.  In order to impress Maa Lakshmi, all the gods thought that the procession should be taken to Kundanpur with great pomp.
When all the gods started gathering Lord Vishnu's Vaikuntha, everyone saw that Ganesha is also coming to Vishnu's abode.  Everyone got worried after seeing this.  Because they did not want Ganesha to attend the procession.  They said that Ganesh ji eats a lot of food and looks strange.  Strangely, it meant Ganesha's head and his body was big.
Due to this, the gods were hesitant to walk with Ganesha in the procession.  Therefore, they all  said to Lord Vishnu to ask Ganesha to take care of the heaven.  Although Lord Vishnu did not like this thing, but after insisting on everyone, he requested Ganesha to stay in heaven.
Ganesh ji felt very bad about this, but he agreed to stay in the heaven.  Then Narada Ji put the whole thing in front of Ganesha and suggested a plan.  The plan was that Ganesh ji's ride i.e. Mooshak (the mice) were the head of all the rat species.  If the army of rats dig the path through which the procession is to be passed and spoil the way, then the procession will be hindered.
Ganesh liked his plan and then something like that happened.  Rats had spoiled the way and when the procession came, Lord Vishnu's wheel of the chariot got buried inside the earth.  The balance of the horses also deteriorated and the procession stopped there.  Even after many attempts of the gods, the wheel did not come out.
A farmer saw the gods while trying and wanted to help them.  The gods gave him a chance, although they knew that with the help of the farmer there would be no solution.  When the farmer caught the wheel, he chanted Jai Ganesh and the wheel went out.
Everyone was surprised and one of the processions asked the farmer why did you say Jai Ganesh.  Then the farmer replied that Ganesh ji is going to remove from every dilemma and he takes his remember before starting any work.
Then all the gods became ashamed and realized that by not giving importance to the external beauty of any creature, give importance to their thoughts, conduct,character and goodness.  Then all the gods went back to heaven and prayed to Lord Ganesha.  In this way Ganesha joined the marriage of Lord Vishnu and Mother Lakshmi with the help of Narada.