After Mahishasura, there were two more demons, who took the Indrapuri by conquering in the war and taking possession of the heaven by taking away the Indra, Surya, Agni etc.  Once again the gods had to be humiliated by the demons.  Then the gods remembered Mateshwari and remembered  that Mateshwari had given us a boon that whenever my devotees face troubles , I would protect them.  Like Mahishasura, I will slay the newly risen demons. 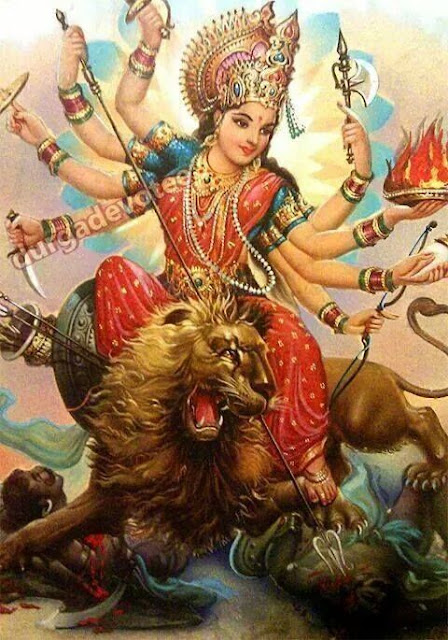 Meditating on this assurance of Shri Durga ji, they all  gods went to the Himalayas to praise Maa Durga and started praising her. In this way, when all the gods were invoking Maa Shakti together, Goddess Parvati came from there. That very beautiful maa Parvati asked the gods - 'Whom are you calling, in whose praise are you engrossed?'  'O Bhagwati, Shumbha-Nishumbha has insulted us, suffering from their atrocities, we are remembering Shri Durga ji for help here.  On hearing this reply of the Gods, Parvati ji disappeared from there.
One day two powerful messengers of Shumbha and Nishumbh named Chand and Mund came on the Himalayas.  There they saw Maa Ambe absorbed in devotion in a very beautiful form.  They had never seen such a beautiful woman before, such a beautiful form that the entire Himalayas were being illuminated.  Chand and Mund immediately described this unique beauty to their lord Shumbha and Nishumbh in this way. She has a moon-like face to relieve all grief.  The eyelids steal the beauty of the snake.  Eyes are more beautiful than lotus, eyebrows are like bows, eyelashes are like arrows. Waistline like a lion, speed like elephant , will defeat Rati's beauty.  There is a sword in the hand which is as bright as the sun, wearing a beautiful form. Look  seem like Shiva's ardhangini .
"Hearing such praise of Maa Ambe, Shumbha sent the messengers with a proposal of marriage to the goddess. When the messengers went and spoke to the goddess, the goddess replied," O fool, go away and tell the monster that ,who will defeat me in the war. " Then I would consider that as a groom.
Slaughter of Dhumranayan,Chand and Mund.
When the messenger came to the assembly of Shumbh and Nishumbh, when he said this to the goddess's reply , the monster named Dhumarnayan got up from the middle of the meeting and said with great pride - I can bring her by convincing only , if she does not agree, I will bring her by dragging with grab her hairs.
Hearing this statement of Dhumranayan, Shumbha sent him with a large army to bring the goddess.  In this army, there were also two big trusted demons Chand and Munda of King Shumbha. On the other hand, a large demonic army with Chand-Munda.
Seeing the they coming, the goddess got very angry and due to this anger Jagadamba's face turned black and immediately there appeared Kali Devi in ​​a formidable form.  Killing great demons, Mahakali, with her Khadaga (sword), separated Dhumranayan's head in one stroke and Mahabali Dhumnayan slept in the battlefield forever. When Dhumranayan was killed, Mund got angry and he proceeded to attack Kali.  After a terrible battle with Mund, Goddess separated the head of Mund from the his body. Now the goddess attacked with her spear so that it did not take even a moment to separate Chand's head from his torso.

On the death of their great demons, Shumbha- Nishumbha sent a specific demon, Raktabija, to fight.  It was a boon to the Raktabija that the more blood drops that fall from his body, the more Raktabeeja will be born.  It was also base for Raktabeeja to be proud of it.  He would gladly go to any battlefield and today he went out to fight Devi with the same joy.
Seeing the goddess in front of him, he starting laughing loudly,  then Mata showered arrows so much that the entire army were confused as to whether it was actually rain or a shower of arrows.  This sequence of attack on each other continued for a long time.  Till now, Maa Durga attacked on Raktabeeja was bleeding from his body.  As many drops of that blood fell on the ground, more Raktabeeja were born.  Countless Raktabeejas like this surrounded Durga and her lion, but Chandi and Lion together killed a group of all those demons in the war.
In this way, when many Raktabeeja were born again and again from the blood , then Chandi said to Maa Kali that " I attack on this great mighty monster, then you do not let his blood fall to the ground.  Then  maa Kali took a khappar in her hand as a rage, and drank all the drops of blood falling from the Raktabeeja.  When the mother hit Raktabeeja with the trident for the last time, Maa Kaali drank all his blood.  In this way,  maa Shakti destroyed him.

The some weakend demons who survived went to their lord Shumbha-Nishumbha and told the news of the death of Raktabeeja, hearing this, Nishumbha while holding a sword in his hand, he said - was the Raktabeeja also killed by Chandi, like a lion of a forest kills small animals.
Filled with anger, Shumbh-Nishumbh start roaring such a that ten directions were echoed.  According to the strategy, the flag hoisting the flag by decorating its armies in many ways,  Nishumbha walked such like as a mountain had moved.  Dust started flying everywhere. On the other hand, the arrival of a new monster was also heard in the ears of Chandi.  Chandi also descended from the mountain and shouted at the enemy and made a great noise.  On seeing the goddess, Nishumbh raised a very large bow and generate amazing sound by his bow's thread as if the clouds were thundering.
Such Seeing the terrible monster, the goddess absorbed all her powers into herself.  There was a fierce struggle between Goddess and Nishumbha.  The heads of the enemies were falling as if the mulberry falls by moving the mulberry tree.  In full rage, when Chandi shot an arrow at Nishumbh, his head also fell in two pieces and darkness fell in the battlefield.

When the head of Nishumbh fell in the ground in this way, a monster ran away from battle ground and went to Shumbha and informed him that his brother was killed.
Shumbha got full of angry after the death of his beloved brother.  Without spending a single moment ran to take revenge on Mateshwari.  Speaking to Mateshwari in pride, you have killed such a large army and my brother with the help of other powers including Kali, now see I will take revenge on you alone. 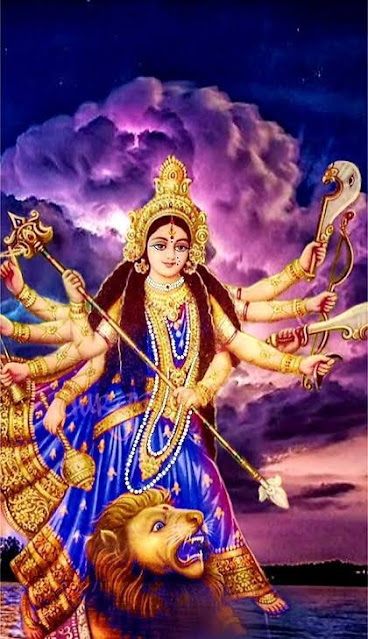 Mateshwari said - 'There is no other power with me.  When the time comes, my power takes different forms and comes out of my body and then enters me. Seeing this, I stand alone to fight you.  Get ready!  In the war, Shumbha also died and after then all the gods together praise Mateshwari's glory.
By Shivgyaan at October 11, 2020