Story of the birth of Lord Parashuram

Story of the birth of Lord Parashuram 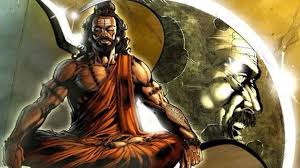 Parshuramji's  grandfather name was Maharishi Richik, who was of a very angry nature, as well as his age was old. But he had not married yet. Once the sage came to mind that he too should get married, he reached King Gadhi and asked his daughter for him. The king, with a desire to not give a girl to a very angry and old Brahmin, demand the Maharishi to give 100 black horses like stunning the moon and moving like the air, which was impossible. But Maharishi Hrichik gave 100 horses from Varuna to King Gadhi in the same way as they were born from Ashwathirtha, now even though the king did not want to marry his daughter to Maharishi Richik.  But he had to get his girl married to Maharishi Hrichik. After some time of marriage, the sage felt that the marriage had taken a long time.  Now there should be a child . Therefore, he wished for the child and prepared a Yagya Kheer for his wife Satyavati.  And another Yagya Kheer for the birth of a Kshatriya superior son for the mother of Satyavati . And both taking yagya kheer in hand and went to Satyavati and said to make proper use of it.  Having said that, he went to forest.
Now Satyavati went to her mother with Kheer and narrated the whole story as told by Maharishi Ritchik. Hearing this,  Satyavati's mother said "Daughter", everyone wants to make his own son quality and powerful. Anybody has no special interest in wife's brother, so your husband must have thought like this. And he has made your Yagya Kheer more effective so that your son is the best of all, so you should eat my Kheer and I will eat your Kheer.  Because my son has to follow the entire earth and your Brahmin son would not have to take forceful , semen and property, on hearing such a thing, Satyavati was very sad and despite not wanting, she gave her kheer to her mother and she ate mother's kheer herself.
After a while, when Maharishi Richik returned from forest and saw Satyavati, he was angry and said what kind of work did you do.  Because of which your body looks so terrible. Of course, you have eaten kheer prepared for your mother.  Which is not right because in it I had included all my enjoyment, wealth of valor and strength, and implanted ,peace and wisdom in your kheer. By using their opposite, your will produce terrible weapon's holder a son with the same attitude as the Kshatriya , and your mother will produce a son with Brahmanic conduct. On hearing this, Satyavati Maharishi fell on Richik's feet and apologized.  The things that happened between her and her mother.  Narrated all the story. 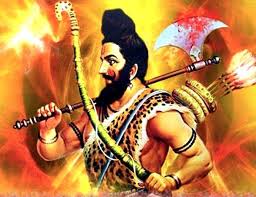 And said, O God, I have done such a thing, because of ignorance, so please be happy and take some measures so that my son does not have such a nature even if my grandson (grandson) is of that nature.  Hearing this, Maharishi was very surprised and said, O Satyavati, you have no fault in this but curse will have to be suffered even if our grandson has to suffer. Therefore, our son will be of Brahmin nature but grandson Kshatriya nature.  So after some time Jamadagni was born from Satyavati and Vishwamitra from her mother.  And here Satyavati became a Kaushiki river after giving birth to a child.  Jamadagni married Ikshvaku dynasty king Renu's daughter.  And from Jamadagni, Lord Parshuram, who destroyed the entire Kshatriyas, was born.  Which was the avatar of Lord Narayana.  Those who were Brahmins from birth and Kshatriyas from Karma.

Email ThisBlogThis!Share to TwitterShare to FacebookShare to Pinterest
Labels: Lordvishnu, The Avatar Series