Shivaji gave this sea of ​​milk-curd to this child.


Shivaji gave this sea of ​​milk-curd to this child.

Hello friends, This story is mentioned in the Linga Purana as the character of Upamanyu.  In which it is told how pleased with the penance of a child, Lord Shiva gave him the sea of ​​milk-curd and placed him in his ganapatya.  Let us know about this story in detail….? 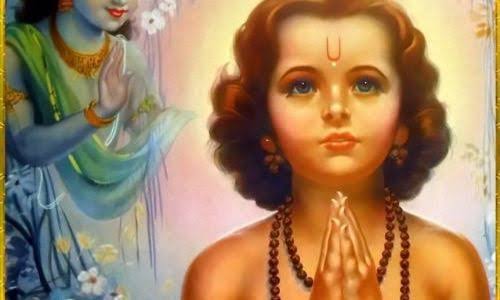 Friends, there was a boy named Upamanyu who was very stunning.  Once he went to his maternal uncle's house.  So he got some milk to drink.
But as soon as he drank some milk, Upamanyu's maternal uncle's son took the milk and drank it himself.  Then Upamanyu went to his mother and started crying saying "Give me milk, I want milk."
Then the mother got sad and grinded some grains of rice and dissolved it and gave it to her son, but after drinking that artificial milk, the child said to her mother, "O mother, this is not milk.
Hearing this, Mata wiped her tears and took a kiss and said, "O son Ratnapurni river is flowing from heaven to Patalalok. But the unfortunate and inferior to Shiva's devotion cannot see him.
The kingdom, heaven, salvation, food made of milk and other good things are not available to them, which Shiva is not pleased with.  In the previous birth, we worshiped neither Shiva nor remembered  Shiva.  So we will get milk from where.
On hearing this, the child Upamanyu understood that without devotion to Shiva, he would not get anything.  So Upamanyu bowed to his mother and went out to do penance in the forest.  He went to the Himalayas and did austerities and lived by drinking air.  Due to his hard penance, the whole world started burning.  Seeing this, all the gods panicked and went to Lord Vishnu.  And Lord Vishnu came to Lord Shiva with all the gods.
And bowing to Shiva, he said, "O Bholenath, this child Upamanyu is doing penance for milk. And due to his extreme austerity, the whole world is burning. So, you stop it. Hearing this, Lord Shiva takes the form of Indra and went to the ashram of Upamanyu.   And looking at Upamanyu, Shiva as in Indra said to , "O Upamanyu, I am happy with your austerity, so I will definitely fulfill your wish to demand whatever boon you want to me. So you asking your boon. Then the child Upamanyu said, "O Devraj, I will only ask for boon from Shiva, so you do not depart, do not waste your time. Hearing this, the angry Shiva  as in indra said" O Muni, I am the lord of all the gods, who is humbled by all the three worlds.  Knowing me and doing devotion will do you all well.  Renounce the thought of that Shiva who have no any quality .
Hearing the words of Indra, who had pierced the ears, Upamanyu said, "You must have been a monster who has come to destroy my dharma. Who you are condemning Shiva, I presume that I had committed any sin in the previous birth." As a result of which I am hearing the condemnation of Shiva today.  My mother rightly said that in our previous birth we did not worship Shiva.
Having said this, he wished to kill Shiva in the form of Indra from Atharvashtra and threw bhasma on Indra with a fist.  And meditated on the Agnaya mantra to destroy his body. Then Lord Shiva removed the weapon from Chandraka Astra and showed his form to Upamanyu.  Showing thousands of milk streams, sea of ​​milk, sea of ​​yogurt etc., a sea of ​​edible food for the child Upamanyu. Shivji said to Upamanyu that "O Upamanyu with your loved ones consume them all, and looking at Parvati, smiled and said," O 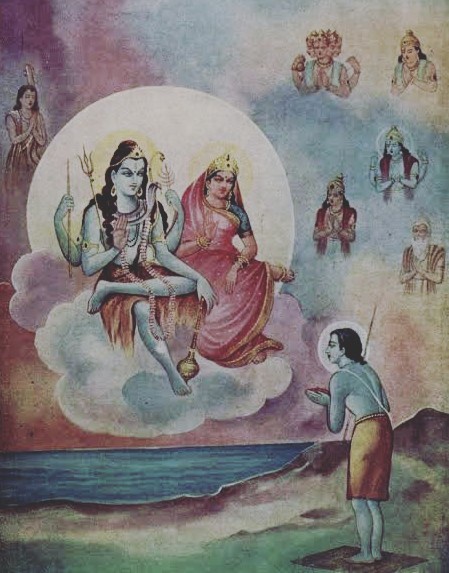 Goddess, I have accepted Upamanyu as a son "and said that" O Upamanyu is now I your father himself  and your mother is world's  mother Parvati herself. I make you immortal, granting you the status of my ganas . If you want anything else, then you tell. Saying this, Shiva lifted Upamanyu in his lap and kissed him on the forehead and gave it to Mother Parvati.  And the mother was pleased and gave Upamanyu the boon of yoga, brahma, opulence, learning, and perpetual young.  Then the child Upamanyu joined both hands to praise Lord Shiva and Mother Parvati.