How long have we been?  Since birth?  Or since naming?  Was not it before ?  Or will not live after death?  It can be said that the  being existence is life and the absence of that 'being' is death.  The basis of both is born.  Then the same old question - first egg or chicken? " Born or died "before?  If born, there will also be death.  Are two sides of the same coin?  Then what is that coin?  Why play the plate at birth and mourn the death?

If we consider, we find that the cycle of birth-death continues uninterrupted.  We are coming and doing own role in the world. Even in body and mind, the game goes on.  Thousands of cells continue to birth-die every moment.  There are so many ideas and thoughts and options coming.  Age is decreasing in every breath, body is getting shabby. It is dying  Not a single moment is stable.  The childhood dies when it  is young and the youth also dies when this is old. There is no way to stop it.

Everything is mortal. We all know that one day we too will die, everyone will get separated. Everything will be missed.

Without knowing where we have come from, where we will go and what our destination is.  Is there any purpose of our being or just to live like this? After death we do not live.  Our memories and names also end after some time.  Just like how many names, faces and relatives are not there.  Looking at the beautiful face, the graceful body and the impish body, it turns into a weak body.
Dominating and overbering voice becomes a supplicant of grace.  Slowly everyone keeps getting up. Illness - old age or any event - by accident.  It is so amazing that we do not want to talk about death even knowing everything is going to be temporary and ending. Do not even take its name - want to hear.  We  want to remain blindly engaged in worldliness as if we will never die .
The relationships in which we remain forgotten and bloated are so raw that the behavior of everyone changes as the body blows its life.  An attempt is made to remove the dead body as soon as possible.  Wife - The same body of the beloved who did not feel like separating, starts feeling haunted.  How much to decorate them, put fragrant Saint, etc. It does not look beautiful.  There is a fear of spending the night alone with that dead body. The wife who is filling the prowess of the body also weeping and separate to the death  body.
Munshi Prem Chand is called by a character in one of his novels - Life is immortal.  Death is only a threshold of rebirth.  The Path to a Higher Life.  The death on which the family weeps is also a death.  The heroic death is the one on which the world cry and the householders rejoice.  Divine death is better than divine life.  There is no life that does not end even.


Successful death is more important than a successful life.  What is in the success of life?  In raising life-capital.  Virtues are the life capital. They are the result of virtuous actions.  And meaning?  To understand the secret of life.  To know what we are, how far we will go.  This is the real purpose of life.  Is the ultimate effort.  The death that gives something positive to the society, warns people and leads them to the right path, that is meaningful death.

On the contrary, people believe in the success of life in the post-money.  The money came in anyway.  May the rights prevail.  Long ago, I had read a novel saying - Successful life is synonymous with happiness, atrocities and slyness.  The lives of the Mahatmas I know were not successful.
Our theology has given a deep discussion on birth-life and death.  Thousands of years ago Geeta proclaimed-
One is the body, the other is the living body in it ie (soul). The body continues to die birth and death. Soul is never born and does not die.  It is unborn, constantly living, eternal .  It is not killed even if the body dies or is killed.
There is never any disorder in soul.  This is 'Naay hanti na hanyate' - neither dying, nor killing.  It can neither burn a fire and wet the water.  Moreover, no other weapon in the world can kill or destroy it. They can kill the body only, not the soul that is in it.  All weapons are made from the earth element itself.  They have no access to the soul before the body.
Dies are those in which there is a disorder-change. There are six vices in the body - it is born, looks powerful, changes, increases, decreases and destroys.  The body is devoid of all these disorders. The body is born and dies.  The Gita says (Lord Krishna),one who is born dies and one who dies is born.
Half the age, the body begins to weaken, the power of the senses starts to decrease.  In this way the body, the senses and the inner being etc. have weathering, but the soul remains unaffected by them all.
There would be a reduction in its regular element.  In the three stages of childhood, youth and old age it remains the same. We do not stick to the body. Swami Ramsukh Das says that the object nascent is automatically destroyed and does not have to be erased.Who does not nascent never erased. We took 84 lakh birth, but no body was with us. The wisdom power to know this was not in those bodies, but present in this human body.
In Gita Krishna explains  to Arjuna that even if the body dies, the soul does not die.  That is, it is not lacking, so it is unfair to grieve.  The same message is found in the poignant context of Bali slaughter. Lord Rama said to tearful Tara when  she was seeing the dead body of her husband-

Made of earth, fire, sky, water and air, these five elements are lying body in front of you. Life is eternal.  It is neither born nor dies, so for whom are you crying?
Swami Ramsukh Das says - The sadness of bodies dying does not come from dying, but the desire to live.  If I live, I have this desire and have to die, then I feel sad.  That is, we have unity with the body, when the body dies, we start to die, only then there is sorrow.  But one who does not accept his unity with the body, does not feel sad when it dies, but there is happiness.  The joy of getting new clothes.
After considering it, we find that neither do we ever born nor did we ever die.  Only transforms.  The body comes from the soil and gone into the soil.  Every living being eats and produces only things produced from the earth.  All beings depend on each other for diet.
All beings including humans are interconnected with the sky element, like an ocean bubble.  Isn't the bubble looking different from the ocean?  Let's have a new birth.  Enjoy your new birth-death.  Eradication of ego is supposed to be the birth of death and equality.


Birth and death are not separate, there are two ends of the same life.  Birth is not the beginning of life nor death is the end of life.  There was life even before birth and life is going to happen after death.

Life is the eternal truth.  But we all have linked life with birth and death.  This false illusion has been kept in mind in such a way that it has started showing the truth.  Man's life started only once and will continue till liberation and salvation.  Life will never end.  The difference is that right now it is physical life where it is the elusive world.
Maya has held it.  Then that end of life will come one day when after leaving this earthly body, the soul will go through the subtle body and go on a infinite journey . But life will not end then.  That life will still be there. Renounced earthly life and attained unearthy life.
But then life remains - the life of the soul, of the subtle world.  The goal that the creator had given, to what extent that was able to achieve it, the ultimate power he had sent to do the work, how much he was able to do - we have to assess it, we will have to account and then the condition of incompleteness of the work  In this, due to not being able to achieve the goal set by being trapped in the illusion, you will have to enter the earth again.  Because the earthly world is the only karmabhoomi.  Do not know how many times the creature had to come in this earth.
Whoever is born in this world, it is inevitable to die. But still people experience grief at death and happiness at the birth of someone. While this is a simple process of a physical change happening regularly , Like childhood after birth, then comes puberty, old age and finally old age, similarly death is also a physical condition of that birth.  After death only body change , the rest does not change anything . 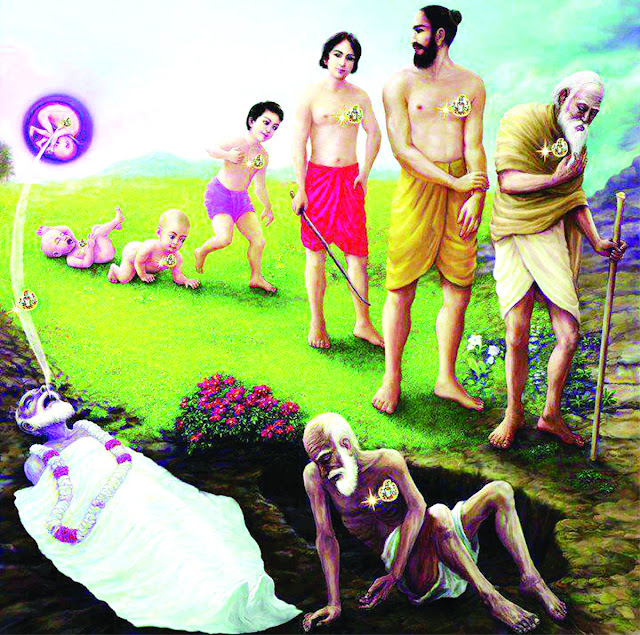 Common people are afraid of death thinking that all this will be lost in the next life. But it is beyond the truth. You will get everything as you have thought and found here. Only change of person, place and relationships  The reason for fear of death of common man from seeing this type is unfounded. It should be believed.
In the Gita, God has clearly said ---"वासांसि जिर्नानी यथा ...............नारोपराणी|"That is, the way we change clothes when the clothes are torn, similarly the body changes only when the body is damaged. This is how we should understand death.


Therefore, according to God, death is only the change of one state of the body. Nothing else changes in it. So it is unnecessary to be afraid of death.