In the Mahabharata period, the Shringverpur state spread far and wide in the coastal region of Prayag (Allahabad), whose king was Nishadraj Hiranyadhanu father of Eklavya. Shringverpur, situated on the banks of the Ganges, was its strong capital. At that time, the power of the state of Shringverpur was equal to the larger states of Magadha, Hastinapur, Mathura, Chedi and Chanderi. 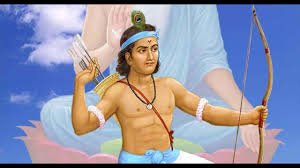 The valor of Nishad Hiranyadhanu and his commander Giribir was famous.
The public was happy and prosperous with the affection of Nishadraj Hiranyadhanu and Rani Sulekha. The king use to governed the state with the help of the Amatya (ministerial) council.
Nishadraj Hiranyadhanu received a son by Queen Sulekha named "Abhidyumna". Generally people called him by the name "Abhay". At the age of five years, Eklavya's education was arranged in the elite Gurukul.
Seeing the child's minds and dedication in the field of war skills from childhood, the Guru addressed the child's name as "Eklavya". When Ekalavya was young, Hiranyadhanu got him married to the Sunita, who was daughter of one of his Nishad friends.


Ekalavya wanted to get higher education of archery. At that time, Guru Drona was famous in archery. But he used to teach only Brahmin and Kshatriya classes and was a staunch opponent of giving education to Shudras.

Maharaj Hiranyadhanu greatly explained to Eklavya that Drona will not teach you. But Ekalavya persuaded the father that Acharya Drona himself would make him his disciple after being impressed by his archery . But Eklavya was not right to think - Drona took the plunge and drove him away from the ashram.
Ekalavya was not one of those who gave up and did not want to return home without getting arms education. So Eklavya made a statue of Acharya Drona in the forest and started practicing archery.
Soon he attained mastery in archery. Once Dronacharya came to the same forest with his disciples and a dog. Eklavya was practicing archery at that time. The dog barked at Eklavya.
The barking of the dog was hindering Eklavya's practice, so he stopped the dog's mouth with his arrows. Eklavya shot arrows with the skill that the dog was not hurt. The dog ran to Drona.
Drona and the disciples were surprised to see such excellent archery. He started searching for that great archer, suddenly he saw Eklavya, the archery which he wanted to confine only to the Kshatriyas and Brahmins, he was worried about seeing it go into the hands of the Shudras.
Then he remembered the promise of making Arjuna the best archer in the world. Drona asked Eklavya - From whom did you learn this archery? Eklavya - Acharya Eklavya pointed to the statue made of Drona clay.
Drona asked Eklavya for Gurudakshina as his right-hands thumb, Eklavya cut off own thumb and offered it to Guru Drona.
Kumar Eklavya comes to father Hiranyadhanu after sacrificing thumb. Ekalavya regains skill in archery without his thumbs. In all the archery competitions held in today's era, thumb is not used, so it would be appropriate to call Eklavya the father of modern archery.
After the death of his father, he becomes the ruler of the Shringaber state. With the advice of the Amatya Council he not only manages his kingdom, but also constitutes a strong army and navy of Nishad Bhils and extends the boundaries of his kingdom.
In the Vishnu Purana and Harivansh Purana it is mentioned that after becoming the king of Nishad dynasty, Eklavya invaded Mathura on behalf of Jarasandha's army and almost eliminated the Yadav army. After seeing the outcry in the Yadav dynasty, when Krishna saw Ekalavya with a bow and arrow with just four fingers in his right hand, he could not believe the scene.

Eklavya alone was able to stop hundreds of Yadav descent warriors. In this war, Krishna killed Eklavya with deceit. His son Ketuman was killed by Bhima in the Mahabharata war.
When all the Pandavas were declaring their valor after the war, Krishna confessed his love of Arjuna.
Krishna had clearly told Arjuna that "What have I done in your love." For this to be called the best archer of the world, for this I get killed Dronacharya, weakened Mahaprakrami Karna and , not willingly killed Bhil son.

Email ThisBlogThis!Share to TwitterShare to FacebookShare to Pinterest
Labels: Mahabharata
Shivgyaan
I am an ordinary person, always want to be in the Lord's service