Other eleven forms of Rudra according to Shaivagam

Other eleven forms of Rudra according to Shaivagam

Brahma, Vishnu, Mahesh, Dev, demon, ghost , etc. were born from Lord Shambhu, many names are from them. Lord Rudra is the creator,  preserver and destroyer of this world. 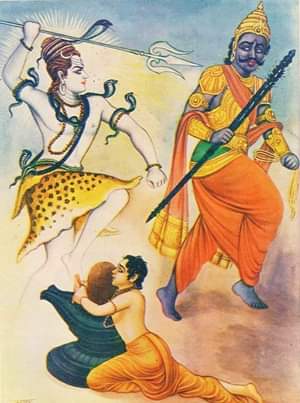 The name of the second Rudra in Shaivagam is Pinaki. Situated on the forgiveness chariot, coordinated by the Brahma Sutra, is Lord Pinaki holding the four Vedas. Shri Brahma ji says to Narada ji - When we and Lord Vishnu bowed to Lord Rudra with a wordy body, then we were got by the omkar chanting mantra. Subsequently, this great word utanttvmasi was appeared in the four Vedas are the form of Pinaki Rudra.

The description of Lord Shiva's abode is found in three places. The first Bhadravat-place which is on the east side of Kailash, over Lahityagiri. The second place is on Mount Kailash and the third is on Mount Monjwan. Although Lord Shankar is an icon of vairaagya and restraint, but because of his complete leela's on Kailash, Mount Kailash is especially favourite to him. Kailash mountain  god Rudra is famous in his third form called Girish. There are two reasons for Lord Rudra's abode on Mount Kailash. The first reason is a boon given to his devotee and friend Kubera to be adjacent to his Alkapuri and the second reason is Giriraj of Rudra's Pranavallabha Uma incarnated here in Himwan.

In the Shaivagam, the fourth form of Lord Rudra has been described as Sthanu . By incorporating Parvati in his vamang(left body), he is the one who provides happiness to her and Stham Rudra, the pompous god of the entire Devamandal. He is self-effacing, self-righteous and fully selfless.

The fifth Rudra Bhagwan Bharga has been called a Bhayvinaashak . May Chandrabhushan, Jatadhari, Trinetra, Bhasmojjwal, the Bhaynaashak God live forever in our hearts. The only Mahadev Bhagwan Bharga Rudra is the one who liberates the suffering world from sorrow and fear at the earliest.

The sixth form of Rudra in Saivagam is called Sadasiva. Those who create all the worlds by becoming Brahma, preserve everyone in the form of Vishnu and in the end kill everyone in Rudra form, they are eternal. According to Shiva Purana, the first formless Parbrahma Rudra imagined the idol for himself with his Leela power. This idol was endowed with all opulence qualities, the only Vandaniya of all, auspicious form, the form of the form and the center of all cultures. By imagining that idol, he became a unique Brahman, thus, the idol of Parabrahma Rudra, who is idolized, is the embodiment of him.

The seventh form of Rudra in Saivagam is called Shiva. All the welfare and virtues of Shiva are the shrines of Gayatri, which Omkar is the building. The word Shiva signifies eternal science. The word Shiva is derived from the Kantau dhatu, which means that the name of the one whom everyone wants is Shiva.

Saivagam, the name of the eighth form of Lord Rudra is Har, who bears Bhujang-Bhushan, the deity whose feet are gracious. Lord Hara has been called Sarp Bhushan. It means that everything is in the body of God . Both creation of time and its destruction on time are both works of Lord Rudra. There can be no more destructive tamoguni than snake, because the instinct to eat even your children is seen in the snake caste itself. That is why God carries a garland of snakes around his neck. Even after holding Kaal in his Bhushan form, God Har is timeless.

The ninth form of Lord Rudra is named Sharva. Tripurahanta, the person who breaks the arrogant of Yamaraja, the khangpani is enjoyable for us. They are also called Shiva Rudra because of the destruction of Tripura riding on the Sarvadevamayya chariot. One of the sarvas also means omnipresent, supreme soul and Lord of the triloki.

According to Shaivagam the name of the tenth Rudra is Kapali. The demolition of Daksha-Yajna and the angry Mukh Kamal Shulpan Kapali should provide us with happiness day and night. According to Padyapuran (Srishtikhand-17), Lord Rudra got angry in this form and destroyed the Daksha-Yajna. 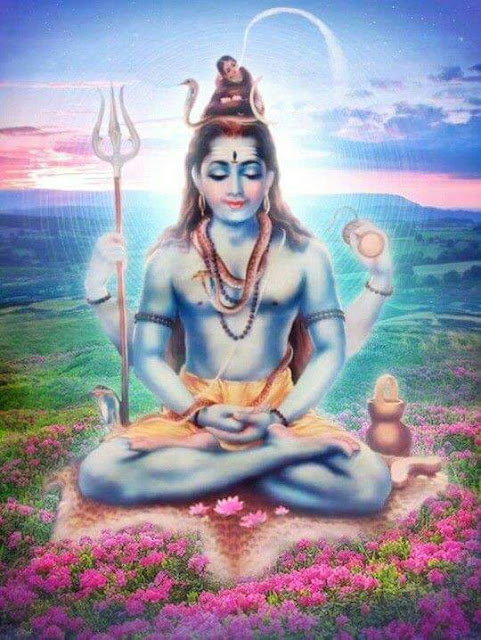 The name of the eleventh form of Lord Rudra is Bhava. Yogendra whose feets are worshiped, who are the refuge of the past and devotees from duality and from whom Vedanta has arisen. In this form, he is present in the whole world and Vedanta as Jagatguru.
And by teaching yoga, we lead the way for autobiography. The seventh chapter of the Lingapurana and the twenty-second chapter of the earlier part of the Shivpuran have a special description of the yogic form of Lord Bhava Rudra and his disciples. In each age, Lord Bhava incarnates as Rudra Yogacharya and preaches the Yogamarga to his disciples (his names are Ruru, Dadhichi, Agastya and Upamanyu).
Here is brief information. After sometime eleven Rudras will be described with detailed information on this blog.