According to Hindu history and mythology, there are seven persons who are Chiranjeevi. All this is bound by some word, rule or curse and it is endowed with all divine powers. All the powers of Ashta Siddhi which have been said in yoga are present in them.It is like parapsychology, only those who know the science of modern science today, such as parapsychology and telepathy, can believe it. Let's know which are the seven living great human beings according to Hinduism.

That is, by remembering these eight people (Ashwathama, Daityaraja Bali, Veda Vyasa, Hanuman, Vibhishana, Kripacharya, Parashurama and Markandeya Rishi) in the morning, all diseases end and man attains the age of 100 years.

On the basis of ancient beliefs, if a person takes the names of these eight immortal people (Ashta Chiranjeevi) every day, then his get life is long. In Kali Yuga, Hanumanji is considered to be the earliest happy deity and Hanumanji is also one of these Ashta Chiranjeevias. Sita blessed Hanuman after hearing Rama's message in Ashoka Vatika in Lanka that he would remain ajar-immortal. Azar-Amar means that one who will never die and never old age. For this reason, Lord Hanuman has always been considered a source of power because he is an under-age.

The description of many incarnations of Lord Shankar is also found in the texts. One of them is an avatar who is still wandering on earth for his salvation.
When there was war between Kauravas and Pandavas in Dwaparyuga, Ashwatthama sided with the Kauravas. According to the Mahabharata, Ashwatthama was a composite part of Kaal, Krodha, Yama and Lord Shankar. Ashwatthama was a very brave, fierce warrior. According to religious texts, it was Lord Krishna who cursed Ashwatthama to wander on earth forever.
The prevailing belief in relation to Ashwathama ... There is a fort 20 km from the city of Burhanpur in Madhya Pradesh. It is called the fort of Asirgarh. This fort has an ancient temple of Lord Shiva. Local residents here say that Ashwatthama comes to this temple daily to worship Lord Shiva.

The supreme devotee of Lord Shiva is Rishi Markandeya. He pleased Shiva and meditated and became Chiranjeevi due to Mahamrityunjaya mantra Siddhi.

Vibhishan is the younger brother of the demon king Ravana. Vibhishan is an exclusive devotee of Shri Ram. When Ravana had killed Mother Sita, Vibhishan had explained to Ravana not to enmity with Rama. On this matter Ravana expelled Vibhishana from Lanka. Vibhishan went to the service of Shri Ram and supported religion in eradicating Ravana's iniquity.

Rishi is also Ashta Chiranjeevi and he edited the four Vedas (Rigveda, Atharvaveda, Samaveda and Yajurveda). Also, he also composed all 18 Puranas. The Mahabharata and the Srimad Bhagavat Gita have also been composed by Veda Vyasa. They are also known as Ved Vyas. Ved Vyas was the son of sages Parashar and Satyavati. He was born on an island in the river Yamuna and had a dark complexion. For this reason, they are called Krishna Dvaipayana. 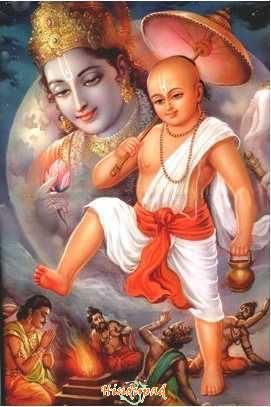 Parashurama is the sixth incarnation of Lord Vishnu. Parashurama's father was Rishi Jamadagni and mother Renuka. He was born on Tritiya of Shukla Paksha of Vaishakh month according to Hindi calendar. Therefore, Tritiya which falls on the Shukla Paksha of Vaishakh month is called Akshaya Tritiya. Parshuram's birth time is considered to be in the combined era of Satyuga and Treta.