Mahadev took the test of Arjun


Mahadev took the test of Arjun


The Pandavas lost their royalty in the gambling game organized by Duryodhana at Hastinapur. Together they lost the Draupadi who was dignity of his family . After Krishna's intervention, the members of the king's assembly , who were religious, condemned the incident to follow the truth. After heavy opposition in the gathering, Dhritarashtra wanted to return everything to the Pandavas. But Shakuni again did a tricky trick. The game of gambling was once again played due to Duryodhana's dogma. This time also the Pandavas lost. The conqueror Duryodhana told his condition to the Pandavas in front of the whole assembly. According to the condition of Duryodhana, the Pandavas were to spend 12 years in exile and one year in exile. 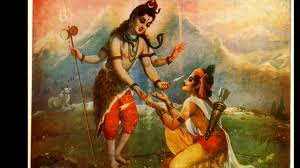 The Pandavas had to wander from here and there during their 12 years of exile. The Pandavas wanted to avenge their insults to the Kauravas.
This required raising power.


Sri Sri Krishna advised Arjuna to get Pashupatastra from Mahadev. Then what was Arjun doing intense penance of Shiva and achieved Pashupastra.

The four years of Pandavas, wandering here and there, passed the exile. The fifth year proved to be very important for Arjun. He  away from his brothers and went to the penance of Shiva in the snowy valleys of Uttarakhand. 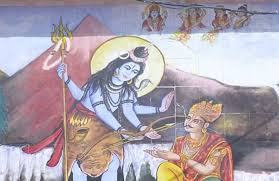 The motive was to obtain Pashupastra from Shiva. From Badrinath, on the way to Swargarahini, a place named Chakratirtha falls.
It is said that archer Arjuna did penance there to get Pashupastra from Shiva. But Arjuna was quite arrogant about his archery. So Shiva decided to take Arjun's exam.
Here Duryodhana came to know about the penance of Arjuna. Then Duryodhana began to worry a lot, he wanted to dissolve Arjuna's penance in some way. He asked the monster named Muk to break Arjuna's penance and kill him. Muk demon visits the austerity site to kill Arjuna by taking the form of a wild pig.
Suddenly Arjun was distracted after hearing a loud voice towards him. 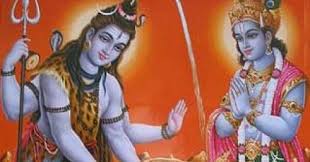 Arjuna angrily picked up the Gandiva bow and released an arrow on the boar.
When Arjun reached the boar, there was a Bhil standing in front.
And there were two arrows sunk in the pig's body.
To decide who was the hunter of killed boar - there was a fierce battle between Bhil and Arjuna.
Arjuna fainted while fighting. When he regained consciousness, he found Bhil smiling in front. Arjun felt that he could not be an ordinary
person. 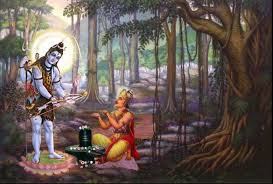 He started to remember Mahadev in his mind repeatedly.


Shivji appeared to Arjuna in his real form and told that he composed this Leela only for the destruction of Arjuna's ego. Arjuna's penance was successful and he got Pashupastra. After this Arjuna met his brothers.