Shri Krishna's life is very full of paintings, he has seen every ups and downs of life. There is hardly any human in this world who has faced so many difficulties in life. But Krishna suffered everything, without becoming obsolete.

In those difficulties, there is a simple feeling of Krishna and that innocent smile of his. Every form of life is associated with his life message. Need to understand Krishna to see his life journey. 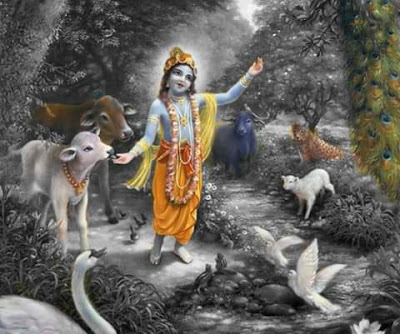 It is said that Lord Krishna s' smile, his innocence in his appearance and activities are self evident of spiritual transformation across globe. He reinforced the then rituals to regulate and stabilize social institutions by social interactions and restoring harmony ultimately by bringing righteousness. 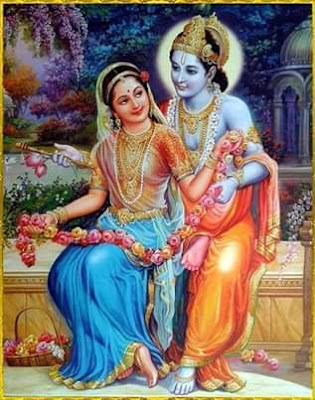 All social and cultural organization as symbolic systems of communication are shaped by the inherent structure of the human brain. Experts agrees today, and expanded on the symbolic approach of rituals with religious symbol systems which provided both a "model of" reality (showing how to interpret the world as is) as well as a "model for" reality (clarifying its ideal state). The role of ritual, according to Geertz, is to bring these two aspects - the "model of" and the "model for" - together: "it is in ritual - that is consecrated behaviour - that this conviction that religious conceptions are veridical and that religious
directives are sound is somehow generated." 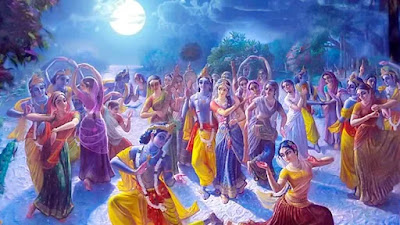 Human Life is a chance for devotees to establish the relationship of Divine Love, of God, whose abode exists everywhere both inwards and outwards. That endeavor should be the focus of our Lives. That Love which includes Service, That Love which makes one Devotional, That Love which transcends all Qualities, That which alone Emancipates. 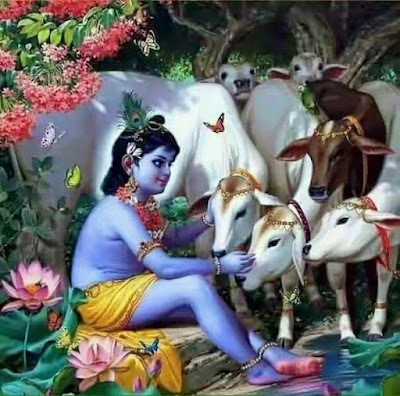 Lord Sri Krishna, the son of Maharaja Nanda, is the Supreme Personality of Godhead because of His Love Divine whose remembrance drive away all fear and obstacles, because of his mystical insight, handsome appearance, sweet talk, wonderful actions, charming personality, great opulence and herding cows. He is therefore called also as Nanda Gopala. 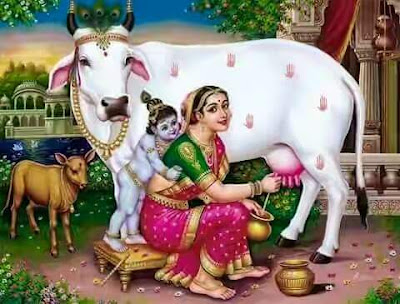 Maa Yashoda and her neighbours and friends took immense pleasure in enjoying all of Krishna's and Balarama's pranks yet all of welfare and social reforming activities, discovered the Supreme in their hearts through Krishna's presence, the gopis and gopas were always in bliss being blessed by that power which even mere knowledge of god cannot bring to individual. The gopis especially developed a deep love for him. At the very early in age of around 10 years, Krishna decides that it is now time to leave Vrindavan and head to Mathura, to fulfil his mission. Unaware about the return possibilities, the gopis were very depressed to see Krishna leaving and especially Radha was devastated. 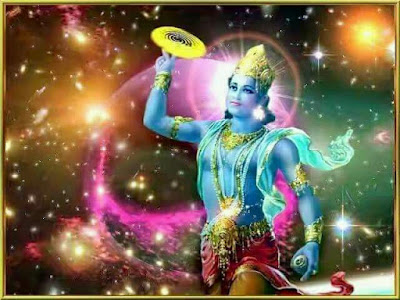 The birth of Krishna is in itself a transcendental phenomenon that generates awe among the Hindus and overwhelms one and all with its supra mundane happenings.
It was that time when Mother Earth, unable to bear the burden of sins, committed by evil kings and rulers, appealed to Lord Brahma, the Creator for help. Lord Brahma prayed to the Supreme Lord Vishnu, who assured him that he would soon be born on earth. One such evil force was Kansa (Kamsa), the ruler of Mathura (out of ambition and upon the wrong association/advice of his personal confidante - Banasura, Kansa overthrew his father and installed himself as the King of Mathura) and his people were utterly terrified of him and crimes. On the day Kansa's sister Devaki was married off to Vasudeva, an akashvani or voice from the sky was heard prophesying that Devaki's eighth son would be the destroyer of Kansa. The frightened Kansa immediately unsheathed his sword to kill his sister but Vasudeva intervened and implored Kamsa to spare his bride, and promised to hand over every new born child to him. Kamsa relented but imprisoned both Devaki and her husband Vasudeva. 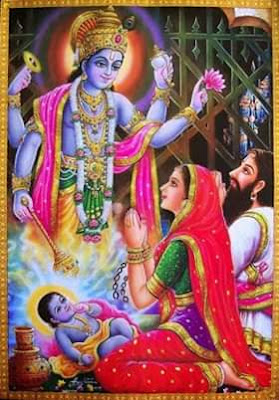 The seventh child, Balarama, was saved when he was moved to Rohini's womb. The eighth child born to Devaki and Vasudeva was Krishna. Krishna was saved from Kansa's wrath and raised by a cowherd couple, Nanda and Yasoda.
After Krishna grew up and returned to his kingdom, Mathura. When the news about their arrival reaches the residents of Mathura, they were all overjoyed and awaited to catch a glimpse of the lads. Ladies get atop roofs of buildings and shower flowers on Krishna and Balarama as they walk down the streets of Mathura. Even the Brahmins went to greet them in keeping with the tradition of welcoming great souls into the land of Mathura. 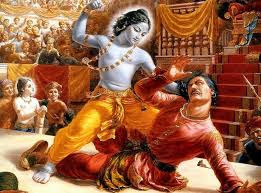 After killing all cruel army of Kamsa and during wrestling Krishna jumped over the high guards of Kansa and proceeded to tackle him. Kansa was well prepared for this moment and he immediately unsheathed his sword and shield. Krishna nonchalantly caught hold of Kansa's hands - it was a grip Kansa could not free himself from. Krishna then knocked Kansa's crown down and grabbed his long hair. Dragging Kansa to the wrestling dais, Krishna threw him down and straddled his chest. Striking Kansa over and over again, Krishna stayed there till he made sure Kansa was dead. 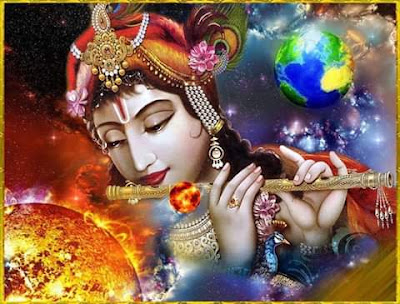 After Kamsa along with all his cruel associates were eventually killed by Krishna, as was originally predicted by the divine prophecy to restore order (Dharma), and Ugrasena was reinstated as King of Mathura and then met his real parents, Devaki and Vasudeva. The boys fell at their parents' feet. Though Devaki and Vasudeva were in ecstasy at meeting with their children at last, they also realized the true, supreme nature of Krishna and hence, stayed on in that joy of being with the Supreme Being. Ugrasena finally ascends the throne and rules over Mathura for a long time. 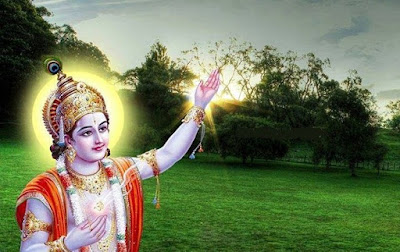 Lord Krishna's transcendental form is eternal, full of infinite knowledge, bliss, pure love and is thus full of the most dazzling splendor. He eternally sees, maintains and manifests the infinite universes, both spiritual and mundane. He possesses inconceivable, innumerable attributes, whom the pure souls see in their heart of hearts with the eye of devotion tinged with the salve of love. (Brahma Samhita) 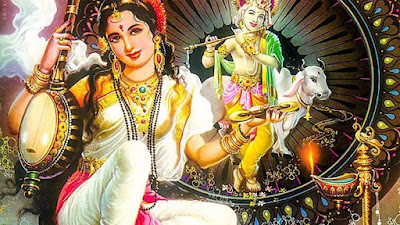 In the Gita, Arjuna (the main inquirer) is selected to be the recipient of Krishna’s confidential instruction, because he is devoted to God, and not envious of his greatness. The Vedas (meaning knowledge), although appearing to be from the East, or of “Indian” origin, are actually for everyone who is open to hear them. They are also called “revealed” knowledge, descending into the pure hearts of God’s faithful, or pure devotees. Though the Vedas are certainly quite intellectual, they are not a product of the intellect or senses. While meant to convince our intellect of the truths and greatness of God, these literatures also point out the limitations of reason for understanding the Supreme Spirit or that which is inconceivable to our experience. 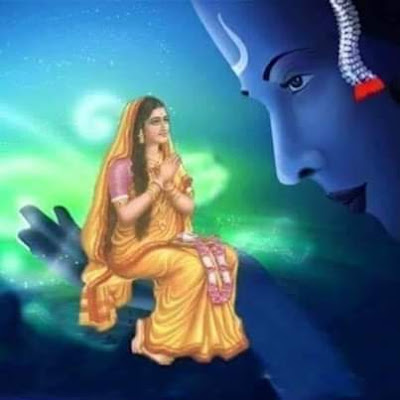 Thus the Vedas are revealed to the pure devotees, and today we can hear about Krishna from those who are dear to him, and love him. What we hear, we will gradually realize by becoming purified through spiritual practice, and ultimately through obtaining the grace of Krishna, and his pure devotees. By getting to know Krishna, we will gradually love him, and when we fully love him, we will know him in our heart of hearts, as our dear most friend and well wisher. Spiritual love is the way to the heart of Divinity, and Krishna is the heart of Divinity. 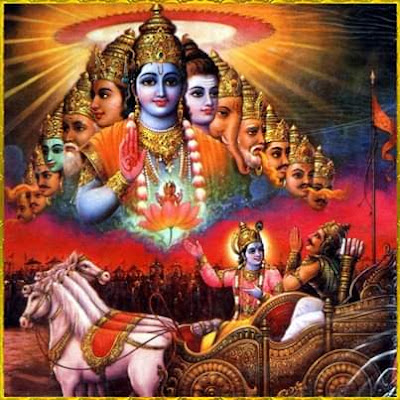 Prabhupada refers to Krishna, as “the Supreme Personality of Godhead”. This epithet is an elaboration from a primary verse in the important scripture, Shrimad Bhagavatam, or the Bhagavat Purana. After describing many principle incarnations of God, it is indicated that such incarnations are unlimited, like the waves of the ocean. Though unlimited, the incarnations have a source of emanation, and that source is Krishna. Krishna then is seen as the original, supreme personality of the unlimited personalities of Godhead. He is the original candle that lights all the others. The Gita envisions a society in which every human has the right to freedom and equality.  There are no walls of religion, caste, varna, sex and wealth between man and man.  Every human being according to his nature, being detached and workless, considers it his duty to remain engaged in the service of mankind and accepts indolence, laziness and insecurity.  He does not have his own wishes.  The progress and prosperity of society is its progress and prosperity. 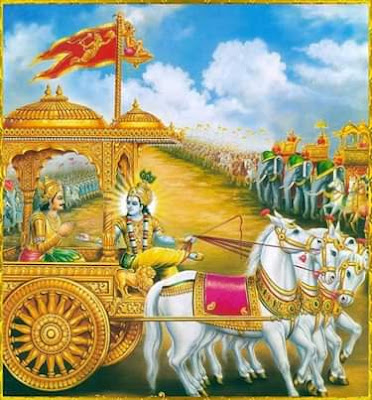 Although incarnated in all eras, for God, there is no “birth” or “death”. By definition He is primeval, always existing, the source of everything, who has no material form with a particular date of creation. In fact even the individual soul—ourselves—are spoken of as unborn (aja), since spiritually, eternally, we are all part of God. According to the Bhagavad-gita—Krishna’s song or sermon—God is understood to “appear” at various times to serve His purposes. These purposes are generally understood to be reestablishing religious principles, to uplift and inspire the faithful, and to vanquish the miscreants who are causing major world problems. He is compared to the sun, which appears to be “born” at sunrise, and “die” at sunset, but actually always exists beyond our view. 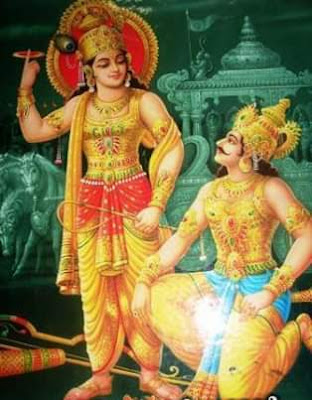 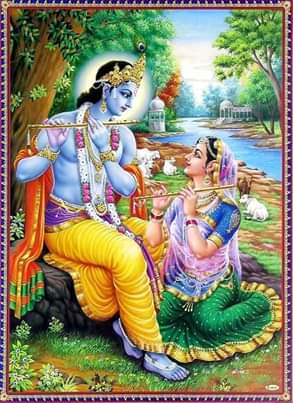 Krishna is the only person in the whole history of human consciousness who is tremendously in love with life, with the poetry of life, with the music of life, with the dance of life. He is not at all life-negative, he is very affirmative. And he accepts life as it is; he does not put god and the world as opposites.

Krishna is far closer to life. The flute is the symbol of life. Dressed beautifully, standing in a dancing posture, the flute in his hands on his lips, it looks like he is going to sing a song at any moment. He looks so alive, and he is wearing a beautiful crown of flowers with peacock feathers. This is far truer to life. That's how life is. It is tremendous joy.

Email ThisBlogThis!Share to TwitterShare to FacebookShare to Pinterest
Labels: Shreekrishna, The Avatar Series
Shivgyaan
I am an ordinary person, always want to be in the Lord's service