On the day of Kartik Purnima, Vishnu took the first "Matsya" avatar.

Once before Kalpanta, a very large monster stole the Vedas due to Brahmaji's inadvertence. The name of that monster was Hayagriva. Knowledge vanished as the Vedas were stolen.

The darkness of ignorance spread everywhere and sin and unrighteousness prevailed. God then killed Hayagriva and protected the Vedas by holding fish to protect religion. How did God take the form of Matsya. Its astonishing story is as follows.


Before Kalpanta, a saintly king was doing penance. The name of the king was Satyavrat. Satyavrat was not only a saintly soul but also of a very generous heart. It was morning. It was sunrise.
Satyavrat was bathing in the Kritamala River. When he took water in Anjali for a tarpan after taking a bath, a small fish also came with water in Anjali. Satyavrat released the fish into the river water.
Fish said, 'Rajan! Big creatures of water kill small animals and eat them. Of course a big creature will kill me and eat it. Please protect my life. Mercy arose in Satyavrat's heart. He put the fish in his kamandalu filled with water. 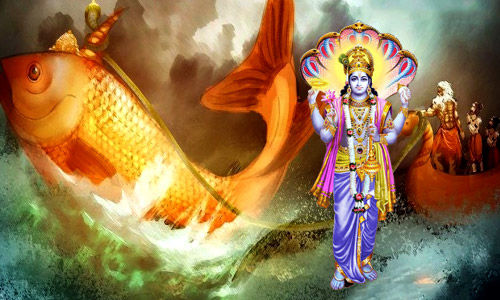 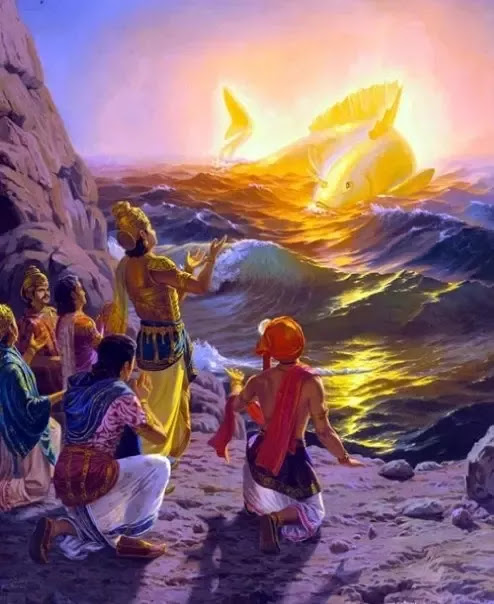 Satyavrat was amazed.  He had never seen such a fish till today.  He said in awe-filled voice, 'Who are you to drown my intellect in the ocean of astonishment?  Keeping in mind the speed at which your body grows daily, it can be said without any doubt that you are divine.  If this is true, please tell me why you have taken the form of fish?  Actually, he was Lord Srihari.
Srihari, the fisherman, answered, 'Rajan!  A monster called Hayagriva has stolen the Vedas.  Darkness of ignorance and unrighteousness is spread all around the world.  I have taken the form of Matsya to kill Hayagreeva.  From today on the seventh day the earth will revolve in the cycle of holocaust.  The sea will rise.  There will be terrible rain.  The whole earth will be drowned in water.
Nothing will be visible except water.  A boat will come to you, you will sit on the boat with the saints with all the grains and medicines seeds.  I will see you again at the same time and will give you knowledge of self-realization.

Satyavrat remembered Hari from the same day and started waiting for the holocaust. On the seventh day, the scene of the Holocaust was present. He started flowing out of his range. Terrible rain began. Water got burnt in a short time.
The whole earth dissolved in water. A boat appeared at the same time. Satyavrat sat on the boat with the Saptarishis, he also filled the seeds of whole grains and medicines on the boat.
The boat floated in the sea of ​​catastrophe. Nothing was visible in that ocean of holocaust except for that boat. Suddenly, the fish-like god appeared in the ocean of holocaust.
Satyavrat and Saptarsigna started praying to the God of fist, 'O Lord! You are the beginning of the universe, you are the guardian and you are the protector. Take pity on us, protect us. 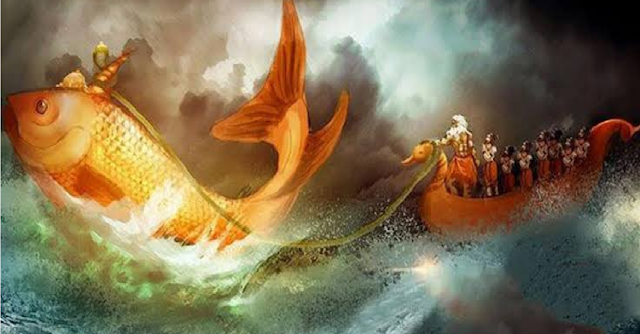 On the prayers of Satyavrat and Saptashis, the God of Matsyarupa was pleased. He gave enlightenment to Satyavrat according to his word, told, 'I live among all beings. There is neither high nor low. All beings are equal. The world is mortal. There is nothing in the mortal world except me. The creature who spends his life looking at me, finally gets into me. '
Satyavrat's life was blessed after receiving enlightenment from the God of fish. He became free only when he lived. When the outbreak of the holocaust subsided, the God of Matsya killed Hayagriva and snatched the Vedas from him. God again gave Vedas to Brahma.


In this way, God not only saved the Vedas by taking the form of fish, but also gave immense welfare to the creatures of the world. Similarly, God comes from time to time and takes care of gentlemen and sages.

Image source by www.pinterest.com and www.google.com
By Shivgyaan at November 13, 2019

Email ThisBlogThis!Share to TwitterShare to FacebookShare to Pinterest
Labels: Lordvishnu, The Avatar Series