God of the Origin of the World- Lord Surya


God of the Origin of the World- Lord Surya

****************************************
In the Sanatan Dharma, Lord Surya is not considered to be just a planet, but Lord Bhaskar Surya has been considered as the most important deity in the world.  The eyes of Lord Shiva and Shri Hari Vishnu have been told that both these divine entities see the actions of all beings in the world.  The glory of Lord Shri Surya begins to be found only in the early rites of the Rig Veda and he is depicted as a great deity in the #Rigveda. The Lord Surya is said to be the creator of the material world.  Although we know #Brahma, #Vishnu and #Mahesh in Tridevas but there is another category of Tridevas in which Surya, Vayu and Indra are considered as Tridev.  Lord Sri Hari Vishnu was born as Lord Sri Rama in the Surya dynasty.  Lord Surya and twelve Adityas are considered to be the first and Lord Shri Hari Vishnu is also placed in the category of Adityas.  Apart from Lord Shri Hari Vishnu, only Lord Surya is the only deity in whose reverence most festivals are celebrated.  Festivals like Makar Sankranti, Pongal, Achala Saptami, Chhath Puja, Ayathar Puja, Rath Saptami etc. are dedicated to Lord Surya.  Lord Surya is respected not only in #Sanatan Hinduism but in almost all religions of the world except Jain Buddhist.  In Greek religion the god Surya is called Helius.  Not only India but many countries of the world have temples dedicated to Lord Surya.  Lord #Surya rides the chariot and draws seven horses to his chariot.  These seven horses symbolize seven days or seven colors.  The charioteer of the Sun's chariot is Arun, the form of the morning.  Chhath festival celebrated in Bihar in India is one such festival in which Arghya is also offered to the setting sun.  Lord Surya is also associated with Yoga and Surya Namaskar is considered one of the best rugs of yoga. 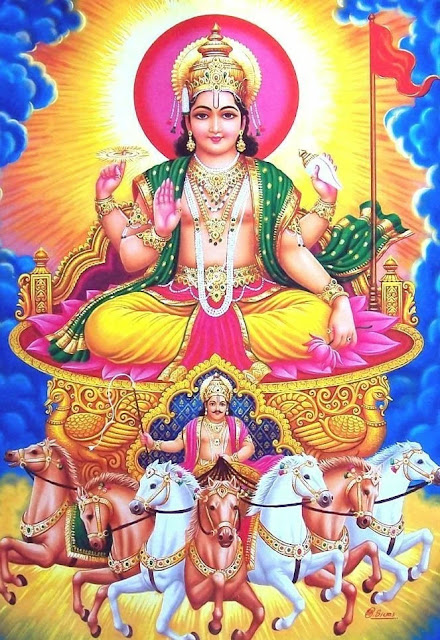