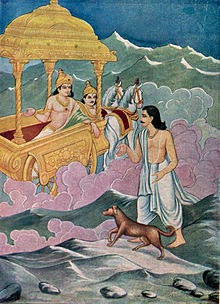 After the end of the eighteen-day war of Mahabharata, the Pandavas under the guidance of Shri Krishna made political integration of the whole of India. Time passed, now that time has come when the curse of Mata Gandhari is about to come true, Shri Krishna, considering the demand of time, surrendered his Leela and left for Neej Dham Baikunth and gave directions to Arjuna.

Here in Hastinapur, when Maharaja Yudhishthira came to know that Shri Krishna had surrendered his leela, he was very much pained.
Shortly thereafter, the Pandavas made up their mind to leave the world, giving the crown to Abhimanyu's son Parikshit, and the five brothers, including Draupadi, started preparing for their departure to heaven.
It is the story of the time of the ascension. Maharaj Yudhishthira went to climb the Himalayas. Draupadi and her four brothers fell one by one into the snow and died. Some kind of a dog had survived. He was following Dharmaraja. At the same time, Devraj Indra was present in front of Yudhishthira with the chariot. He ordered Maharaj Yudhishthira to sit on the chariot. Dharmaraja said- 'This dog has walked with me till now. So this will also go with me.
Devraj Indra said- No, there is no place in heaven for those who keep dog. You leave the dog.
Yudhishthira said - Devraj! What are you saying? Renunciation of devotees has been described as a great weapon similar to brahmacharya. That is why I cannot leave this dog for my happiness in any way. I can never attempt to leave the refugees, the weak, and those who want to die, even if my life goes away. This is my eternal fast.
Then Devraj Indra said - O Yudhishthra! When you left your brothers and your wife, then why is your love for this dog?
Dharmaraja descended - Devraj! I have sacrificed those people to die, not in a living state. Because I do not have the ability to give life to the dead. I request you to show fear to the refugee, to kill a woman, to kill a Brahmin, and to reprimand friends - equal to these four types of sins is the sin of renunciation of a devotee. Such is my opinion. Therefore, I cannot leave this dog in any way.
On hearing these words of Yudhishthira, the dharma, which existed in the form of a dog, was revealed. And said - Yudhishthra! You have given up the dog and abandoned yourself to heaven. Therefore, no one can equal you.


Thus ownself dharma and Indra praised Yudhishthra and took him in his chariot to heaven.

Email ThisBlogThis!Share to TwitterShare to FacebookShare to Pinterest
Labels: Mahabharata
Shivgyaan
I am an ordinary person, always want to be in the Lord's service