He said to Ved Vyas ji

Maharshe! People have different perceptions about me.
Some call me 'nature',
Any male
Some believe in God,
Any religion
In some opinions, I am a completely free form of fear.
Consider something
And some Kalyanamaya Sadashivs tell.
Similarly, other people consider me to be a unique Sanatan Brahman produced by Vedanta.
Are.
But in reality, which is powerless and formless,
It is only Satta-chitta and Anand whose Deity is there and whose secret is hidden in the Vedas, I will reveal my divine form to you today,
Look.
As soon as God said this, Ved Vyasji saw a child,
Whose body had blackness like Neil Cloud.
He was laughing surrounded by Gopakanya and Gwalabalas.
He was Lord Shyamsundara,
Those wearing yellow clothes were sitting at the root of Kadamb.
His tableau was amazing.
Along with him, a forest named 'Vrindavan' ornamented with new Pallavas was also seen.
After this, Kalindakanya Yamuna wearing the aura of Neel Kamal appeared.
Then there was a vision on Mount Govardhan, which was raised by Sri Krishna on his hands to make Indra proud.
That mountain is going to give great pleasure to the cows and gopes.
Shreekrishna said-
'I am! You who have seen this divine eternal form,
This is my perfect, passive, quiet and truthful Deity.
There is no better element than this Kamalalochan form.
The Vedas describe this form.
This is also the reason for the reasons.
This is the truth, ecstasy, chidanandaghan, sanatana and Shivatattva.
You consider this Mathurapuri of mine constantly.
This Vrindavan, this Yamuna, these Gopakanyas and Gwal-Bal are all continual.
My incarnation here, it is also continual.
Do not doubt it
Radha is my sweetheart.
I am Sarvagya, Paratpar, Sarvakam, Sarveshwara and Sarvandamay God.


This whole world, which is the luxury of Maya, seems to be in me. 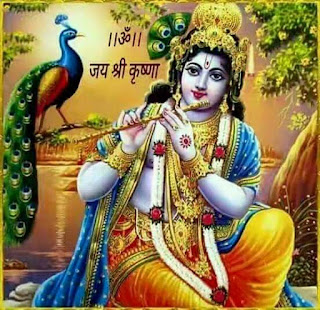