In Gokul and Nandgaon, a special celebration of Nandotsav is held on the second day of the birth anniversary of Lord Krishna, the hero of Braj. After the birth of Shri Krishna at midnight in Mathura, all the Kans soldiers were put to sleep and Vasudev's fetters were opened.

Then Vasudev left Sri Krishna at Gondul at Nandarai.
Lala is born at Nandarai's house, slowly this thing spread in Gokul.
That is why 'Nandotsav' is celebrated in Gokul on the second day of Shri Krishna's birth.
On the day of Bhadrapada Navami, there is a celebration of Nandotsav in all Brajamandal.
'Dadhikando' ......
This festival is also celebrated as 'Dadhikandas'. 'Dadhikando' means the mud of yogurt.
The tradition of throwing turmeric mixed curd is still practiced today.
In the guise of Nand Baba and Yasoda, the temple priests cradle Lord Krishna.
Sweets, fruits, nuts and sugar candy are looted.
Devotees consider themselves blessed by receiving this Prasad.
In the religious city of Vrindavan, Nandotsav is celebrated from place to place.
In the huge Sri Ranganatha temple of North India in Vrindavan, the second day of the birth anniversary of Lord Shri Krishna, the hero of Braj, there is a lot of splendor of Nandotsav.
The famous 'Lathe Fair' is organized here at Nandotsav.
On the day of Nandotsav in the famous Shree Ranganatha Temple, built in South Indian style, devotees stand and watch to get a glimpse of the Lathta Fair.
When Lord Ranganath comes on the chariot to the west gate of the temple, then the wrestler who climbed the bow, worships Lord Ranganath and takes the blessings of Vijayashree and starts climbing the log.
At the same time when the wrestlers start climbing on the 35 feet high log, many minds of oil and water from the top of the scaffold fall on the other Gwal-Wala log, causing the wrestlers to fall to the ground below.
On seeing this, the devotees feel a thrill.
Taking blessings of God, the Gwal-Wala wrestlers again try to climb on the log by supporting each other and start climbing uphill with full water between the edge of strong water and the edge of oil.
After several hours of hard work, finally the Gwalas get an opportunity to win by climbing on the log of the blessings of God.
On seeing this exciting fair, the devotees of the country and abroad are overwhelmed with reverence.
Coconut, lota, guava, banana, fruit and fruit start climbing on the pillar of Gwal-Wall.
Similarly, Nandrotsav is celebrated on the second day of Lord Krishna's Janmashtami festival not only in Vrindavan but also in other parts of India.
On hearing this Lala was born in the house of Nandarai, all the Gopans, Gopis and Gokulwasis started celebrating happiness.
All houses, streets, chowk etc. were decorated and greetings were sung. This was the upbringing of Krishna and Balarama, and both kept their minds charmed by their pastimes.
Say Nanda Kelala ki Jai…. 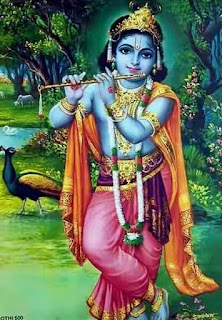