Once Shri Krishna Baldev and Satyaki lost their way at night!

It was a dense forest; neither was there any way forward nor could I go back! It was decided to tie the horses and rest in the night! It was decided that all three would wake up and guard them!
At first Satyaki woke up and the other two fell asleep! A vampire descended from the tree and began to challenge Satyaki for a fight. Satyaki became extremely angry after hearing the vampire's challenge!
Both started to fight! As the vampires started to fight twice as much as the vampires were furious! The more the vampires grew in size, the more the vampires grew in size. In the battle, Satyaki got hurt a lot!
A stroke has passed, now Baldev wakes up! Satyaki did not tell him anything and fell asleep! Baldev was also heard as a vampire shouted! Baldev was furiously confronted by a vampire! A rage passed while fighting.
Now it was the turn of Shri Krishna to wake up! Even Baldev did not tell him anything and fell asleep! In front of Shri Krishna also faced the challenge of the vampire! The more vampire Shri Krishna addressing the greater anger, Krishna smiled as calmly as he could. ; The size of the vampire kept decreasing! In the end it became like a worm which was tied by Shri Krishna in the end of his patuka!


In the morning, Satyaki and Baldev told the story of their misfortune to Shri Krishna, then Shri Krishna smiled and showed the insect, that is, that anger-like vampire was growing the same size as you used to anger! I did not respond to its anger with anger, but in a calm manner, it became discouraged and weakened! So work with restraint to overcome anger! 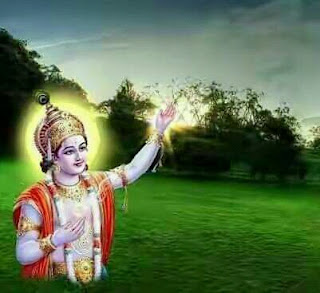