In addition to the eight Pataranis of Lord Krishna, sixteen thousand queens were also there,

Is this true and was it appropriate to do so by Shri Krishna?

Today a friend asked a question like this ……
So what answer would we give, but according to the knowledge that we have received, we are writing here according to whatever you have forgotten, you want to be forgiven by everyone… ..
Ved Vyas ji, thousands of years ago, in the Dasam Skandha, chapter 69, verses 33 to 42 of the Srimad Bhagavata Maha Purana
This episode is described in full detail,
according to this :-
When Lord Krishna killed the luxurious king Narakasura (Bhaumasura) and entered his splendid palace, he saw that Bhaumasura had taken sixteen thousand princesses from various states of the country and kept him captive!
After Bhaumasura's death, it was impossible for these princesses to return to their respective families again!
Astu, appeared in Interpore,
Seeing the male superior Lord Krishna, he prayed to protect his life and honor.
Everyone was fascinated by the vision of the beautiful image of Shri Krishna, even as he considered her unbearable grace and his ultimate good fortune, he had chosen her as his beloved husband.
(Verse 31, 32, 33)!
Shri Krishna also accepted to save the lives of those girls and to give them due respect in the society.
Subsequently, Lord Shri Krishna in different palaces in the same Muhurta,
Taking different forms, at the same time, duly married (panigrahan) with those 16000 princesses!
What is surprising to the almighty God Almighty? "
When Devarshi Narada came to know about these 16000 queens of Shri Krishna, they were skeptical like a friend or many people!
They started thinking how surprising it is that Shri Krishna could get married with so many Kumaris from one body, one time, at the same time!
Now, with an eagerness to know how tragic or pleasant her marital life is with 16108 queens in Dwarka, Naradji himself reached Dwarka to see Lord Krishna's family! "
Narada ji saw in Dwarka, his eyes were wide open!
He saw that Lord Krishna along with all his queens is conducting the best religions that purify the householders!
Although he was the same, Naradji saw him differently with each of his queens!
He saw the supreme opulence of Sri Krishna's Yogamaya and experienced its enormity!
Hearing all this, Naradji's amazement and curiosity have no limit!
In Ramavatar, the God who adhered to decorum did not do the same in Krishnavatar where he had followed a wifely religion!
Shri Krishna ji married 16108 devi lawfully!
Some scholars are of the opinion that, Grihasthasrama describes the religion,
The 16000 verses of the Vedas, at the time of Krishnavatara, became princesses with the spirit of prabhu seva and finally the married wives of Shri Krishna!
Maa Saraswati or Vedas are not fully aware of the glory of Shri Krishna ji, then what is the matter of male humans, dear readers, it would be better that you or we read the tenth chapter of Shrimad Bhagavad Gita ……….
Because only Shri Krishna ji can tell about Lord Krishna ji and that too when he gets disciple like Arjuna …….
Jai Radhey Govinda Friends….
Hail to the devotees of Lord Krishna….
!! Say Jai Shreekrishna!!
!! Jai Jai Shree Radhe !! 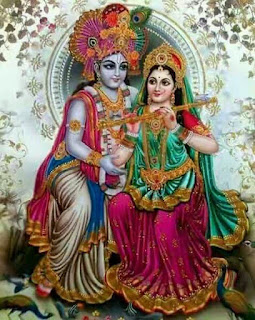 Email ThisBlogThis!Share to TwitterShare to FacebookShare to Pinterest
Labels: Shreekrishna