The compassion of Radha Rani

A Marbari seth went to Braj , he had to stay for a few days.

He had a rule.

Before taking food, he used to feed a saint and then used to do it himself.
One day it was time for lunch, Seth sent servants to go and bring saints.
On that day Shri Ji wished that there was a big bhandara, all the saints went to the bhandara.
No saint was found in the rain.
Servant was show a mad beggar on the stairway of the temple.
The servants thought neither the saint would meet nor the seth would eat nor would he allow us to do eat food .
So he took two red yellow clothes from the market and one put him on the neck to shoulder , put one on his head, and made him tilak and told him that you are a saint.
Our Sethji gives good Dakshina.
Do not say anything in front of Sethji, I will say that he is moni baba.
Took him to Sethji.
Seth ji made him sit, washed the feet, decorated the plate.
The hot pudding was still served, the poor beggar was asking as soon as he saw the pudding and started eating it.
When the saints have food, they pray first and then get food.
Now seeing this Seth snatches food from beggar.
He made his cry, he kept on crying.
Sethji prayed Shreeji, I did my best.
After that Sethji had his meal.
The beggar kept crying hungry.
In the night, Kishori ju came in Seth's dream, Kishori ju said, "Made him hungry and you makes a very big donor.
Seth said, "He was not a saint, he was a hypocrite.
Kishori Ju said, "If Seth had to feed one day, then you are searching the saint element of the him.
I have been feeding that hypocrite for forty years, he has not slept hungry till date, I have not asked till date whether he is a saint or a hypocrite….
Jai to the Albeli Sarkar....
Jai Jai Shree Radhe... 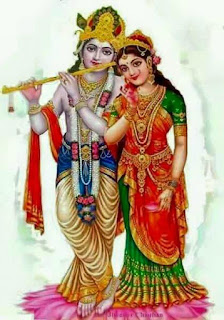