Shiva is a god in the trinity. He is also called the God of Gods. They are also known as Mahadev, Bholenath, Shankar, Mahesh, Rudra, Neelkanth. In Tantra Sadhana, he is also known as Bhairava. Are among the major deities of Hinduism. His name is Rudra in the Vedas. It is the conscience of a person's consciousness. His name of Ardhagini (Shakti) is Parvati. He has sons Kartikeya and Ganesh, and daughter Ashok Sundari. Shiva is seen as a yogi in most paintings and is worshiped in both Shivalinga and idol forms. The serpent god is enthroned in Shiva's neck and holds damru and trident in his hands. He lives in Kailash. This is the basis of Shaivism. Shakti is worshiped in all forms with Shiva in this opinion.
Lord Shiva is called the God of Destruction. Lord Shiva is noted for both a gentle figure and a raunch. Shiva is considered different from other gods. Shiva is the ruler of the origin, condition and destruction of the universe. Lord Shiva is believed to be the god of destruction in the trinity. Shiva is the source of eternal and creation process and this period is the basis of astrology. Though the meaning of Shiva is considered to be welfare, he has always possessed both rhythm and holocaust. 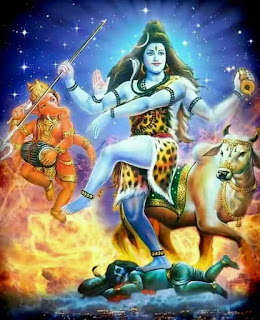