Lord Shiva is amazing with his deeds and not only mysterious by his form. Whether there is a moon on their spear or a garland of snakes on their neck or an antelope blister, everything that Lord Shiva is holding is a big mystery behind it.

The "moon" on his spear symbolizes the mind. Shiva's mind is innocent, serene, holy, strong, his conscience always awake. Shiva's moon is bright. Brutal and violent creatures like "snakes" are under Mahakal. The snake is a creature of tamoguni and destructive instinct, which Shiva has kept under him. So there is a necklace of Snakes around his neck. Shiva has an antidote "Trishul" weapon in his hand. Trishul destroys the human, physical, divine and spiritual three heat in the universe.
Doing the dum-dum "Damru" which he plays while dancing the orgy. The sound of Damru is the "brahm"form. Shiva has a "mundamala" around his neck which signifies that Shiva has subdued death. The body of Shiva has a "skin", which is considered a symbol of violence and egoism. This means that Shiva has suppressed violence and arrogance and suppressed it under him.
Shiva's vehicle is Taurus. He is always with Shiva. Taurus means, Dharma Mahadev rides this four legged bull ie Dharma, Artha, Kama Moksha is under him. In essence, Shiva's form is immense and infinite, Shiva's glory is incomparable. The whole world is absorbed in Omkar.
They themselves keep renunciation and make the devotees rich. The "third eye" of Shiv is also similar. According to religious scriptures, all the gods have two eyes but Shiva has three eyes.

This is the third eye knowledge eye of Lord Shiva. It is a symbol of rationality. As soon as the eyelashes of this wisdom eye open, the work is consumed by burning. This conscience does not allow wickedness to be thought of as free, while keeping its sage. In the end, its item remains only after burning it. In fact, this third eye God has given to every person, this wisdom thus remains in us as inspiration. Just need to wake him up. The third eye of Lord Shiva is the place of obedience. This command cycle is the source of wisdom. If this third eye is opened, then the chances of a normal seed man can come from the tree.

Actually Shiva's third eye is the symbolic eye. The task of the eyes is to show the way and to be careful of the troubles that are being read on the way. Many times in life such crises also occur; Which we cannot see with both our eyes. At such a time, it is discretion and patience as a true guide that makes us identify right and wrong. 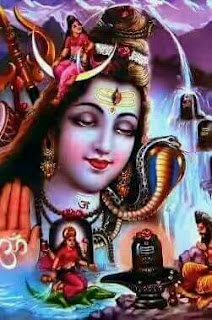