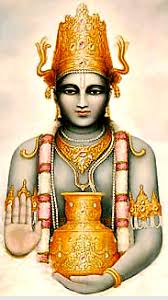 # Who was Dhanvantari, who is worshiped on DHANTERAS *

* There is special worship of Lord Dhanvantari on Dhana Teresa.  He is considered to be the creator of Ayurveda and the physician of the Devtas. The 12th incarnation(Avtaar) of Lord Vishnu was of Dhanvantari, in the 24th incarnation. *


* We get three stories in relation to the birth of Dhanvantari: - *

* 1.  Dhanvantari I, born of Samudra Manthan: It is said that Lord Dhanvantari originated from Samudra Manthan.  They came out of the sea with an urn of nectar (Amruit Kalash) for which there was a war between the Devas and the Asuras.  The story of Samudra Manthan is found in the Puranas like Srimad Bhagavat Purana, Mahabharata, Vishnu Purana, Agni Purana etc.

*2.  Dhanvantari II, son of Dhanva: It is said that in the Kashi dynasty, a king named Dhanva pleased BRAHMDEV (BRAHMAJI) by worshiping him and got a son named Dhanvantari as a boon.  It is found in Brahma Purana and Vishnu Purana.  This was the second birth of Dhanvantari, born of Samudra Manthan.  Dhanva was the son of Kash, the founder of the city of Kashi. We find two dynasties in the Kashi dynasty tradition.  According to Harivansh Purana, there was a Dirghtapa from Kash, Dirghtapa to Dhanva Dhanwa to Dhanvantari to Ketuman, Ketuman to Bhimrath, Bhimrath to Divodas while according to Vishnu Purana, Kash to Kashyya,  Kashyya to Rastra Rastra to Dirghtapa , Dirghtapa to Dhanvantari, Dhanvantari to  Ketuman, Ketuman to Bhimrath and Bhimrathto to Divodas.

* 3. Dhanwantari III, son of Veerabhadra: 1 When the sage Galavas was distraught with thirst, while wandering in the forest, a girl named Veerabhadra, carrying water from the pitcher, quenched his thirst.  Pleased with this, the gala sage blessed that you will become the mother of a worthy son.  But when Veerbhadra said that he was a prostitute, the sage went to the ashram with him and he made Kush's floral etc. and placed it in his lap and he was revered by inviting Vedic mantras and called the same Dhanvantari. Extension: First two of the above  The stories are more valid.  According to the first story, after the combined efforts of the Devtas and the demons were calm, there was churning in the sea itself, due to which Lord Dhanvantari appeared with a golden urn of nectar in his hand.  Scholars say that during this time many kinds of medicines were produced and after that nectar came out. *

* Although Dhanvantari Vaidya is considered the birthplace of Ayurveda.  He studied the flora of the world and showed its good and bad effects.  Out of thousands of texts of Dhanvantari, only Dhanvantari Samhita is found, which is the basic text of Ayurveda.  Adi Acharya Sushruta Muni of Ayurveda received this sermon from Dhanvantariji.  Later Charaka etc. carried on this tradition. It is said that Dhanvantari was around 7 thousand BCE.  He was the son of King Dhanva, the king of Kashi.  He made important research on surgery.  His great-grandson Divodas finished him and preached to the disciples like Sushruta.  The battle of Dasharajna took place during the time of Divodas. * * The biggest scientific experiment in Dhanvantari's life is that of nectar(Amruit). Golden urn of nectar(Amruit Kalash) is associated with his life.  Dhanvantari had mentioned the use of making nectar(Amruit) in the golden vessel itself. He said that Brahma and other Devtas had invented the nectar (Amruit) called Soma for the destruction of a little death.  According to Dhanvantari, etc. Ayurveda, there are 100 types of deaths.  There is only one death in them, Ayurveda diagnosis and treatment are the only attempts to prevent the remaining premature death.  Dhanvantari gave one measure of age modulator *

He was born on the day of ‘Dhanateras’.  Dhanvantari is the adorable Devta of healing, health, age and glory.  His mention is found in Ramayana, Mahabharata, Sushruta Samhita, Charaka Samhita, Kashyapa Samhita and Ashtanga Hridaya, Bhava Prakash, Shargadhar, Srimadbhavat Purana etc.  There are many other Ayurvedacharyas by the name Dhanvantari.