THE FOLKTALES OF DHANTERAS 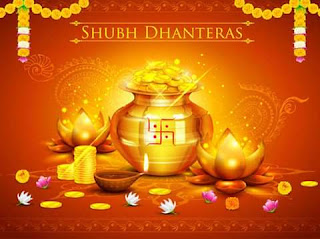 The folktale of Dhanteras:

In North India, the festival of Dhanteras is celebrated with full devotion and faith on the day of Trayodashi of Kartik Krishna Paksha.  In addition to Dhanvantari, on this day, Goddess Lakshmi and God of wealth Kubera is also worshiped.  Apart from the story of Dhanvantari being born behind celebrating this day, another story is also prevalent.  It is said that at one time Lord Vishnu was coming to visit the dead land, then Lakshmi Ji also requested him to walk with her.
Then Vishnu said that if you believe what I say, then come back.  Then Lakshmi ji agreed to him and came to the ground with Lord Vishnu.  After some time, Lord Vishnu reached a place and said to Lakshmi that you stay here till I come.  I am going towards south direction, do not come there.  When Vishnu left, Kautuhl woke up in Lakshmi's mind that what is the secret that I have been denied in the south direction and God himself went away.
Lakshmi could not keep up with her and as God moved forward, Lakshmi too followed.  Going a little further, he saw a mustard field which had lots of flowers.  Seeing the beauty of mustard, she was enchanted and went ahead after plucking flowers and doing her makeup.  On going further, Laxmi Ji broke sugarcane from a sugarcane field and started sucking juice.
At that moment Vishnu came and seeing Laxmi ji was angry and cursed him that I did not allow you to come here, but you did not listen and committed the crime of stealing the farmer.  Now you should serve this farmer for 12 years in the crime of this crime.  Saying this, God left them and went to Kshirsagar.  Then Lakshmi started living in the house of that poor farmer.
One day Lakshmiji told the wife of that farmer that you bathe and worship this Goddess Lakshmi made by me, then cook the kitchen, then you will get what you ask for.  The farmer's wife did the same.  Due to the effect of worship and the blessings of Lakshmi, the farmer's house was filled with food, money, gems, gold etc. from the second day itself.  Lakshmi completed the farmer with money.  The farmer's 12 years were blissfully cut.  Then after 12 years Laxmiji agreed to go.
When Vishnu came to take Laxmiji, the farmer refused to send him.  Then God told the farmer that who let them go, they are fickle, they do not stay anywhere.  Could not stop them very big.  She was cursed by me, so she was serving you for 12 years.  Your 12 years of service are over.  The farmer stubbornly said that no, I will not let Laxmiji go.
Then Laxmiji said, O farmer, if you want to stop me, then do what I say.  Tomorrow is teras.  You must clean the house tomorrow .  Keep a lamp of ghee in the night and worship me in the evening and keep it for me by filling the rupees in a copper vase, I will reside in that vase.  But I will not show you at the time of worship.


With this one day worship, I will not leave your house for the whole year.  Having said this she spread in ten directions with the light of lamps.  The next day the farmer worshiped according to Lakshmiji's narrative.  His house was full of money.  For this reason, Lakshmiji was worshiped on the teras day every year.

Special,,,,,,, special,, reading this legend, we remember the basic principle "Astey", that is, "Yama" (law of law) of not stealing, as propounded by the sages!  In this story, an attempt has been made to tell that what sin is accumulated as a punishment for stealing in our destiny (fate), which we have to suffer in the next life!

There are many ways of getting wealth on Dhan Teres, but more than all the measures, the sacred hymn of Dhanvantari, the god of wealth and healing.