Mother Lakshmi - Shri Ganesh is worshiped together on Diwali.

Diwali is a very ancient cultural festival of India. On this day we worship Goddess Lakshmi, the goddess of wealth and prosperity, and Lord Ganesha, the God of wisdom and wisdom. We all know very well that no auspicious task is ever accomplished without Ganesh worship. Ganesh ji is the provider of wisdom. He is the destroyer of destruction and Vighneshwar. If a person has a lot of wealth and lacks intelligence, then he will not be able to use it properly. Therefore, it is also necessary for a person to be intelligent and wise.
Only then can the importance of money be understood. Ganesha's huge abdomen is a symbol of greater wealth. And the scent is a symbol of sharp intelligence. Also, worshiping them also ends the troubles. The importance of simultaneous worship of Ganesh Lakshmi and the grace of both is told through many stories. There is a legend in the mythological texts that why Lakshmi ji is worshiped with Ganesh ji. Let us know why this happens.
Once, a recluse sage craved to enjoy Rajsukh and worshiped Lakshmi. Laxmi ji was pleased with her worship and gave her a blessing by giving her a darshan that she would get high status and honor. The next day he reached the recluse Sadhu Raj Darwar. He was proud after getting boon. He pushed the king, causing the king's crown to fall down. The king and his courtiers ran to kill him. But in the meantime, a black serpent came running out of the fallen crown of the king.
Everyone was shocked and considered the monk as a miracle and started cheering him. The king was pleased and made the monk a minister. Because of that the king's life was saved. The monk was given a separate palace to live in. He started living gracefully. One day he took the king out of the hands of the monk and pulled him out. Seeing this the courtier also ran back. As soon as everyone went out, an earthquake occurred and the building turned into ruins. The same monk saved everyone's life. Therefore, the honor of the monk increased. With which a sense of ego developed in him.
There was a Ganesh idol in the palace of the king. One day the monk removed the statue from there saying that this statue is not good at all. Ganesha became angry with this work of the monk. From the same day, the wisdom of the monk who became that minister deteriorated. Then the king got angry with the monk and put him in jail. The monk started worshiping Lakshmi in prison again. Laxmi Ji appeared and told her that you have insulted Ganesha. Therefore, worship Lord Ganesha and please him.
After getting the order of Laxmiji, he started worshiping Ganesha. This caused Ganesh ji's anger to calm down. Ganesha came in the dream of the king and said that the monk should be made a minister again. The king followed the order of Ganesha and decorated the monk by giving him the rank of minister. In this way, the worship of Lakshmiji and Ganesha started simultaneously. God of wisdom must also worship Ganesha with Lakshmiji because even if Lakshmiji comes, it is difficult to stop him without the use of intelligence.


In this way Ganesha is also worshiped along with Lakshmiji on the night of Diwali. 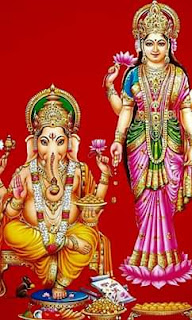