Know why Ganesha and Lakshmi are worshiped together?  What is the relationship between the two

........
Friends, whenever we see a temple or picture, along with the idol of Ganesha, we also see Lakshmi Mata along.  But there will be few people from us who will know what is the relation of Ganesha to Lakshmi Mata, why she is worshiped together.
According to a legend, Lord Vishnu once resided in the Kshira Sagar with Mata Lakshmi.  The two were discussing among themselves, in the meantime, Lakshmi left the mother's mouth that no one could walk without worshiping her.  Every person in the world worships only to receive me.  It did not take long for Lord Vishnu to understand that Goddess Lakshmi became proud of herself.
Lord Vishnu is determined to end the pride of Lakshmi Mata.  Lord Vishnu took a sarcasm at Lakshmi Mata and said that a woman is not considered perfect unless she has no children.  Lakshmi Mata had no children, so she became very sad on hearing this and she went straight from there to her friend Parvati Mata and told her the whole thing.  Parvati ji knew very well that Lakshmi Mata's mind is very fickle and she does not stay in one place for long.


But Parvati could not see the sorrow of Mother Lakshmi.  That is why he entrusted his son Ganesha to Lakshmi Mata and said that you should make your adopted son out of it.  Lakshmi Mata was pleased to hear this.  He blessed Ganesha, whichever person wants to worship him, he will not get the my blessing without worshiping Ganesha.  If you look at the idols of Lakshmi and Ganesha carefully, you will find that the posture of Lakshmi Mata is slightly higher, whereas the posture of Ganesh ji is slightly lower because his position is the son of one. 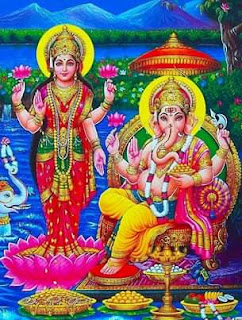