Rules to animate the lamp in worship


In Hindu scriptures, one of the things which is important during the course of worship is the burning during the worship. Gods and Goddesses are pleased by lighting a lamp while performing worship. However, it is also believed that given should be lit at the right time and in the right way only then God gets his blessings. We are telling you that what needs to be kept in mind while lighting the lamp.

Lighting a lamp is important because with this method, the end of any worship is considered as offering fruits and flowers, bathing and meditation is a part of worship, in the same way it also has different importance.
It is believed that illuminating in front of God is to remove darkness from one's own life.
Although a lamp of ghee is considered good for lighting a lamp, but on different occasions, different oils and different kinds of wick are applied.
Like on Saturday, lamps should be lit with mustard oil instead of ghee
Always try to make two things interlocked
A wick given is considered auspicious only when it is flowering ie in the middle
Two-spoke lamp completes worship
The lamp you are going to burn, should never be broken or broken
Burning a lamp is better than burning a broken lamp
This leads to all the virtues of worship
If you burn a lamp, then add ghee or oil to it and pull the wick upwards. This will keep the lamp burning till it is finished, extinguishing the lamp in the middle is not considered auspicious. Especially in the midst of worship.
Throw the wick of the extinguished lamp in the soil instead of putting it somewhere
Throwing a wick in the trash kills all the auspicious effects
These mantras chanted while lighting the lamp !!!!!!
Deepjyoti: Parabrahm: Deepjyoti: Janardhana:.
Dipoharatime Papam Sandhyadipam Namostutte.
Good luck, wellness, health, happiness, wealth.
Shatruvriddhi Destruction: Deepajyoti: Namastuti.
Keeping the flame of the lamp towards the east increases the lifespan.
Keep in mind that keeping the flame of the lamp towards the west increases the misery.
Money is benefited by keeping the flame of the lamp towards the north.
Never keep the flame of the lamp towards the south direction, because of this there is mass or loss of money.
The lamp symbolizes knowledge and illumination. Deepak has special significance in worship. The tradition of lighting an odd number of lamps is generally going on. Actually, the reason for lighting the lamp is that we remove the darkness of ignorance and make effort for the light of knowledge in our life.
According to our religious scriptures, it is considered mandatory to light a lamp at the time of worship. Aarti and lighting a lamp of ghee brings happiness and prosperity at home. With this, Lakshmi resides permanently in the house. Also, according to our scriptures, * Panchamrit is considered very important in worship and Ghee is considered one of those Panchamrit. 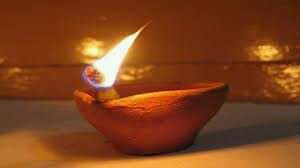